Stok Kangri Trek a fantabulous allurement trek which was one of the most known and famous treks in India and all over the world in now Banned. The peak Stok Kangri has been banned from the year 2020 to 2022, which is three years. The Stok Village community and The All Ladakh Tour Operators Association have stated various reasons and have put their point forward to ban this trek on December 2019. Numerous ideas were behind this ban. The trek needs some technical training and excellent support of experts and equipment. But due to extensive crowding at the site, the villagers were suffering many problems. They had vehemently opposed this overcrowding at the place which was drastically affecting the ecology of the area. There was no proper management of waste disposal at the site. The increasing rate of pollution caused a significant effect on the temperature of the region. The glacier was the only source of water for the villagers, but due to incredible footfall in the area, the water source got polluted. Irresponsible trekkers and craze of trekking have increased the death rate at Stok Kangri.

After all the arguments and problems listed, the Stok Kangri Trek got banned to bring the ecology of the region back to normal and give time to heal naturally. Many precautions, safety measures, and various steps need to be taken even after the trek is open for all. Pollution should be strictly prohibited. Proper disposal methods must be used to secure the deteriorating conditions of the region. This ban will also affect the earnings of the villagers, but improvement will take place, which will be profitable for all. Considering three years would be enough time to clean and create a balance between mother nature and the pollutants.

Chadar Trek almost on the verge of a ban

Chadar Trek, one of the most incredibly amazing and thrilling treks of India which is famous all over the country and aboard, is now on a stake. The pathway was earlier used by the villagers to travel to Leh. When the temperature falls to -10 to -15, so the river frizzes and make a way towards Leh for their livelihood. The Chadar Trek is probably going to get banned for a year or two. The reason to ban this particular trek is overcrowding. The high number of hikers visiting Chadar trek every year in winters. Which has made a drastic effect on the ecology of the region?

In winters the localities of Zanskar Valley use this pathway to get a livelihood to Leh. But due to any trek day in winters, about 300-400 people are crowding the beautiful Zanskar river at different places. The amount of footfall is creating a lot of changes in the region. Commercialization at the site has led to several problems that might lead to strict actions by the Government. Hikers attracted towards the thrill of walking on the frozen river. The Chadar is now melting, at a faster rate than earlier at some places it's not even freezing. The kids at school hostel travel through this pathway to spend their time with family in winter. On average, thousands of trek enthusiasts visit this place which creates chaos and ends up deteriorating the beauty of mother nature.

There no official statement passed towards the ban of this trek, but it is very much likely to get ban soon keeping in mind the following conditions. The prohibition on this trek will surely improve the beauty and ecology of the region. 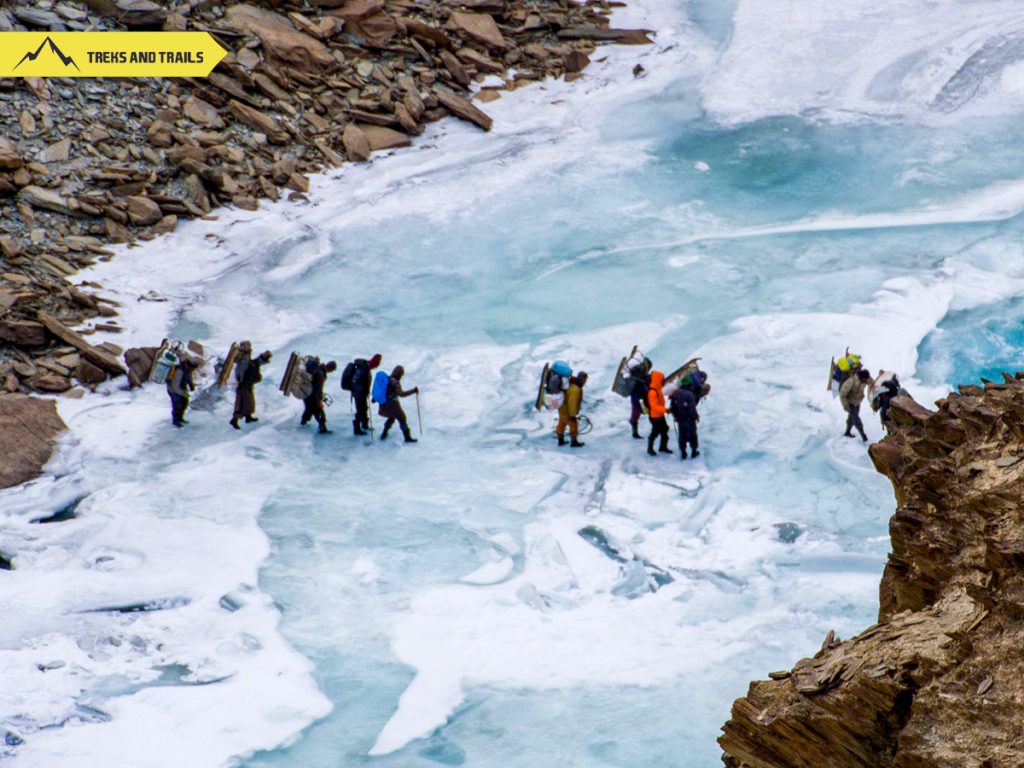 Roopkund which has some unbelievably adorable trails throughout the trek till the summit. One of the most famous treks in India where every trekking enthusiast wanted to enjoy this eternal beauty of mother nature. But back in 2018, the news of imposing a ban on this trek shook the tourism industry and broke many adventure hearts. The heartbreaking decision passed by the Honourable High Court of Uttarakhand was about a total ban on the trek, which was due to the harm occurring on the biological aspects of the region. This ban bought a massive change in the tourism industry to find new and adventurous treks on similar terms as Roopkund. Camping at high altitudes of Uttarakhand was banned, which was very difficult for the trekkers to Summit Roopkund in one go without any halt. Roopkund ban imposed a considerable fall in the economy of the villagers near the camping sites and in between trials. Roopkund trek had given an excellent income to most of the villagers in the form of pottery, serving tea and food or giving their place for survival in mighty mountains. This income turned into a fixed salary for all the villagers as the increased number of trekkers and trekking companies started visiting this region for trekking every year. Some villagers were happy as they were getting the right livelihood near to their own house rather than travelling to another place for work. This ban gave a wake-up call to all the enthusiasts to now be aware of certain things on treks and avoid polluting and commercializing the area as much as possible. 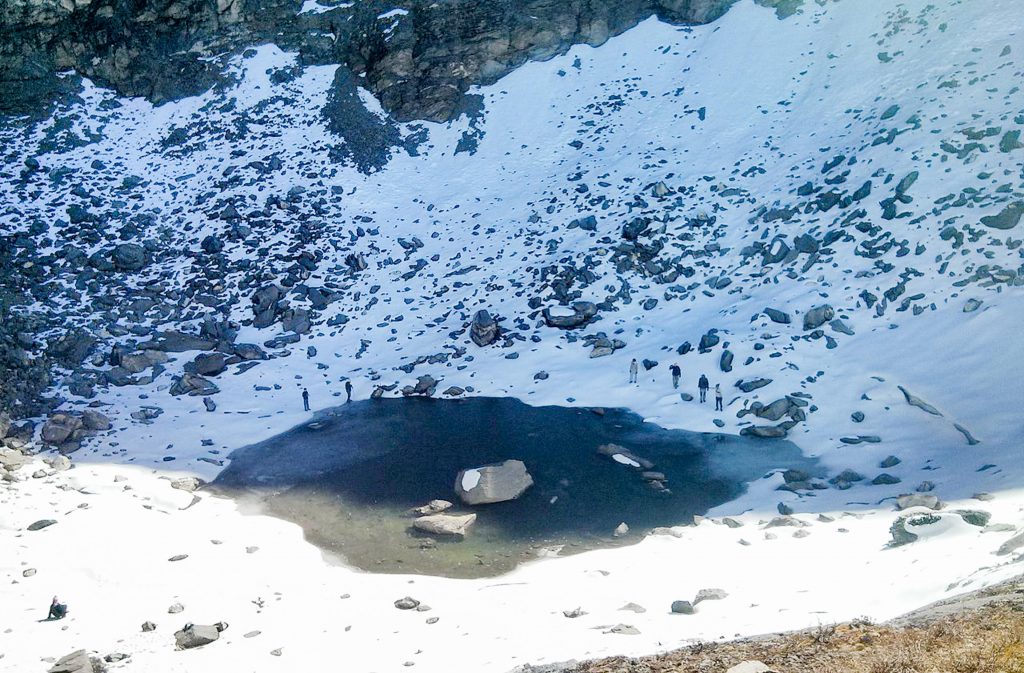 Adhering to the woods fire in Tamil Nadu in 2018, that had led to the loss of several lives, Karnataka Government took the measure of banning hiking in its forests for a temporary period. The forest division issued orders that hiking in the woods was prohibited from the forests regions until rain showers arrived at forest ground. Stating that many areas were fire-prone in Karnataka, the order said that trekking banned until the time the dry season stopped.

Tamil Nadu's forest fire nearby Korangani at Theni district claimed the lives of 10 individuals as approximately 65 trekkers stuck in the forest fire from the region bordering Kerala. A number of those trapped were school students. This fire resulted in the conclusion by Karnataka forest officials to prohibit trekkers from the woods until the rains arrive. Karnataka became the second state to issue such requests following Kerala. Earlier the Kerala government briefly banned hiking in state forest regions too.

Trekking destinations such as Kodachadri and Sharavathi Valley Prohibited in November 2019 because of Monkey Fever. Hikers and nature fans in Bangalore got some unpleasant news. Treks and Trails Bangalore destinations, Shimoga was to be shut because instances of Monkey Fever reported in the region. The illness spreads through migraines and impacts primates and individuals causing disease, intense headaches, low blood pressure, psychological disturbances and tremors—the fatality rate as 3-5 per cent. Government of India and the branches of the woods of Shimoga took steps to stop the spreading of this disease. While trekkers were depressed and ignoring treks or going to the region, Other alternative options are open to exploring several offbeat trekking areas such as Gokarna, Goa as well as ones that are nearer house like Kunti Betta, Antharagange and Skandagiri. Top Banned treks in India, On the arrival of Monsoon each year, most trekking routes are banned by the various department in the Government. In 2019 during the monsoon season, the list of treks banned in Maharashtra was long like Korigad Fort Trek Banned, Andharban Trek Banned, Sudhagad Trek Banned, Devkund waterfall trek banned, Naneghat trek banned, Harihar Fort Trek Banned and Kalavantin Durg trek banned. This list keeps getting longer each year. Now most treks, tourist spots, waterfalls, ghats, lakes are banned each year during the monsoon season. In 2018 Karnala Trek was banned, Pandavkada Waterfall Banned, Mahuli fort Asangaon was banned during peak monsoon season. The various reason for bans in 2019 2018 was overcrowding, accident, deaths, the threat to biodiversity in the Western Sahyadri. This bans will continue or increase in the coming years as the number of trekkers keeps rising each year.

Covid19 or Coronavirus arrived in Maharashtra in March 2020 after the first few cases reported all Treks, Cycling, Gathering of people got forbidden in Maharashtra. Unlock 1.0 started on June 8th 2020 under this order malls, shops, restaurants for taking away were opened. Though trekking is still banned even though the Government has started Salons, Hotels, Gym in July 2020. Till public transport starts it will be difficult for Adventure Tourism to resume like before. Everyone is waiting for a vaccine or therapy to resume normal lives.

The adventure travel industry also suffers from excessive bans in Maharashtra. Ease of business is also less compared to other states like Uttarakhand, Himachal Pradesh, Goa, Kerala which are renowned for tourism and adventure travel operations. Maharashtra can become the most travelled state in India. It has a huge young consumer base and huge spending power which drives the growth rate of most states in India.