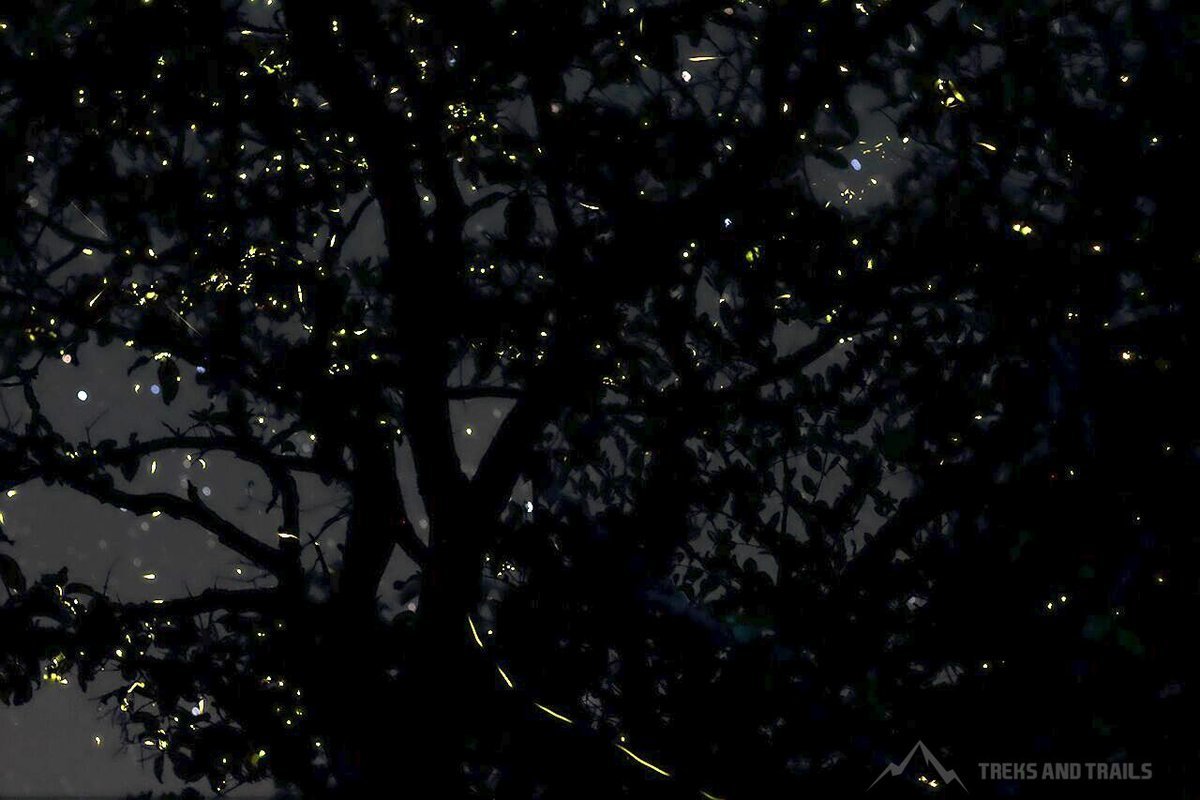 Fireflies Festival Mumbai, we have got you covered with the best destination where you can spot them in thousands. We will have to travel into the countryside away from light pollution. Around Mumbai, there are many destinations to spot Fireflies in Rajmachi Village, Siddhagad Wadi, Prabalmachi village, Bhandardara, Ghatghar, Kothaligad, Kondane Caves and Purushwadi many more.

Fireflies use different blinking patterns to impress the opposite gender; they have many unique designs up to 2000. When dazzled with a light way, Lady fireflies reply with a lighting pattern display to complete the match.

The festival of a million fireflies, Mumbai, Please chat with us for more information. 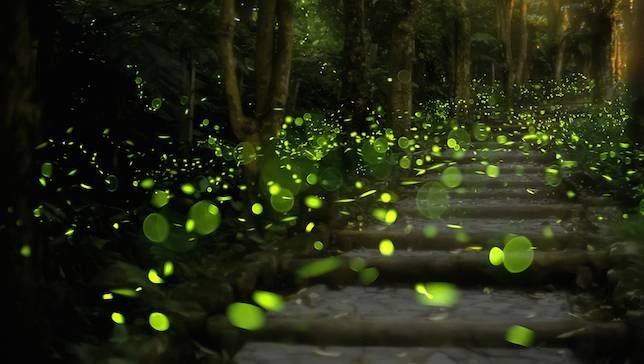 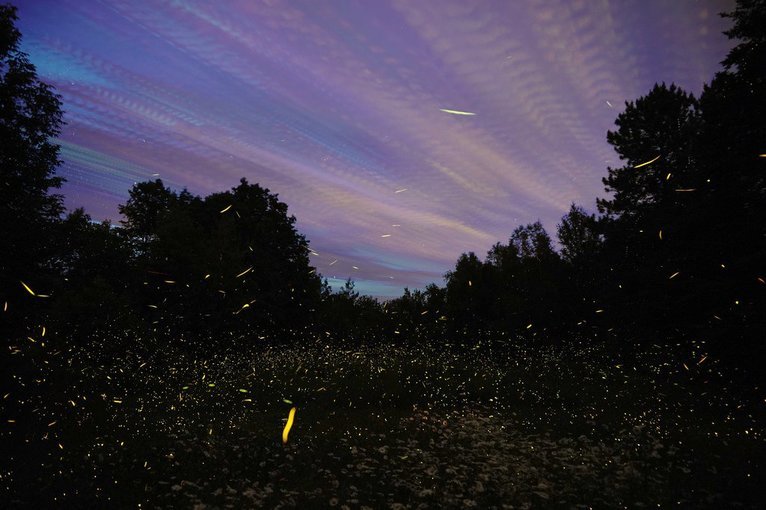 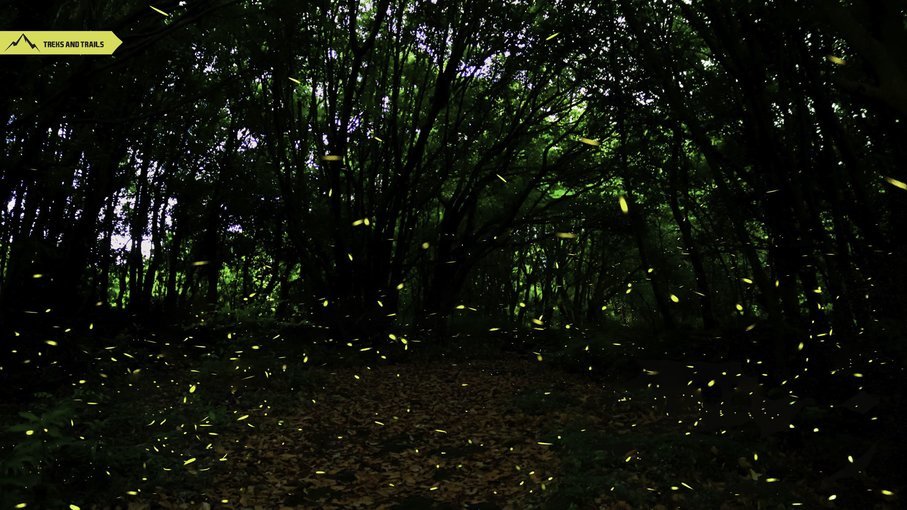 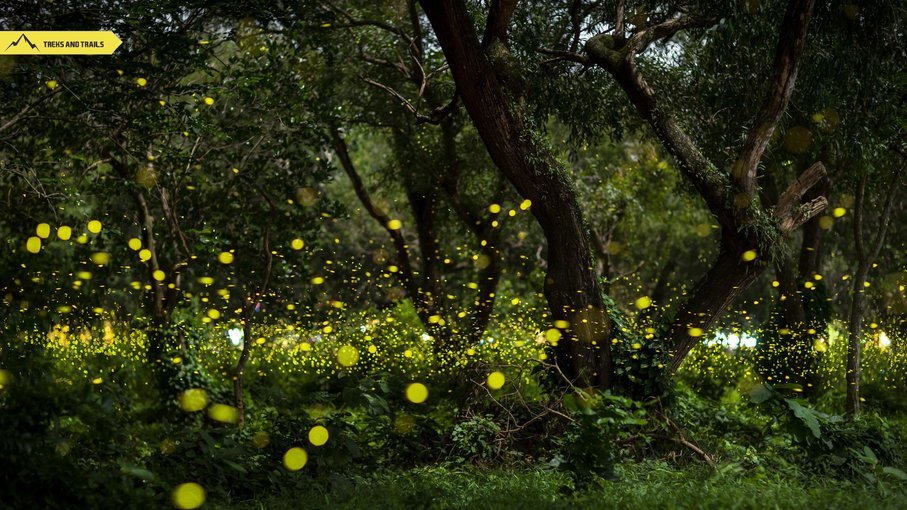 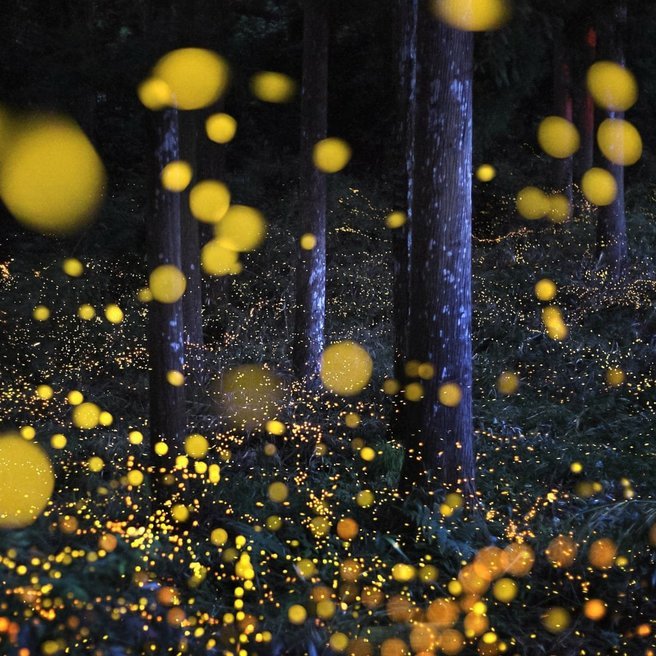 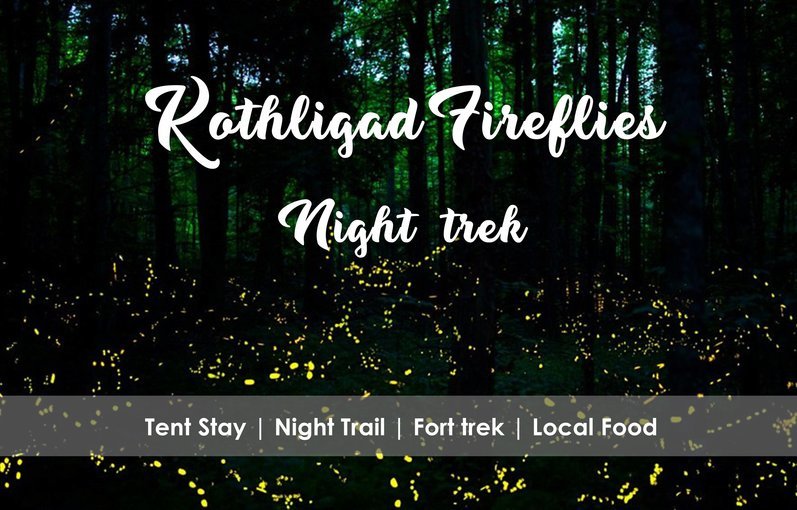 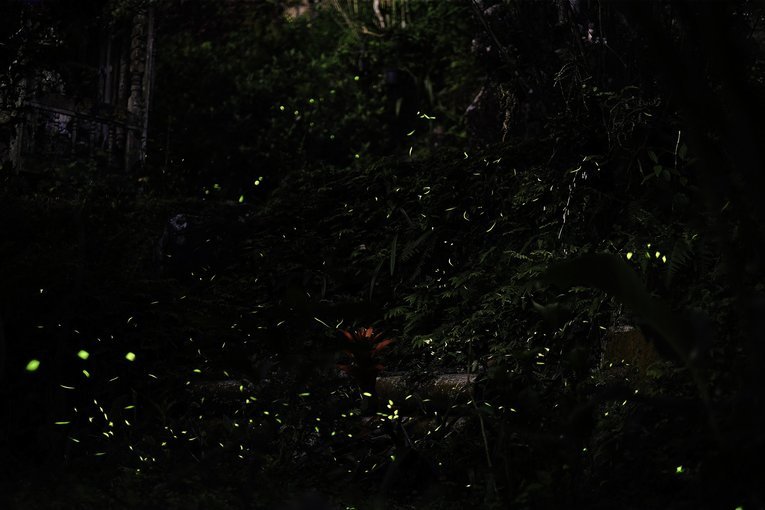 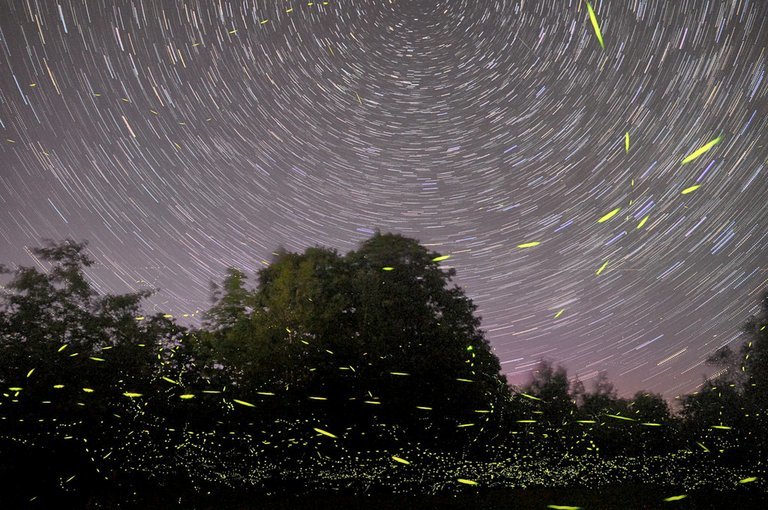 Question 1: When does the Firefly Festival Mumbai begins?

It is generally held in May last week and the first few weeks of June each year in Maharashtra, India. The fireflies forest festival's schedule is announced each year in May. Firefly watching season is generally in June, but the festival is held to celebrate this phenomenon for a few days. Weather plays a vital role in the development and active life of fireflies. The best time to watch fireflies is the period just after the first or the second rains of the monsoon season.

We usually see fireflies premonsoon in the Sahyadri. Once the rains begin, fireflies die after mating. Firefly avoids light pollution, and there is a lot of pressure on their habitat from development in the forest area.

Question 2: Where is the Firefly Festival Maharashtra held?

Firefly Festival is held at these beautiful locations across Maharashtra. Most campsites are by the lake, river, and beautiful hilltop overlooking the picturesque Sahyadri. The area is surrounded by thick woods, making the area perfect for camping. The experience of camp life here is something to remember. The festival has many activities like campfire, bonfire, hiking and camping.

Question 3: Which months is the Firefly Festival Maharashtra Held?
The Firefly Festival Mumbai 2023 will be held from May third week to June third weekend in and around Maharashtra. The reason for this is that the fireflies start appearing during these months. The festival was formed in 2010, and the aim behind it was to draw the world's attention to the diminishing population of fireflies and the need to protect them. The fireflies are generally found in Lonavala, Igatpuri, Bhandardara, Prabalmachi, and Purushwadi villages. If you live in or nearby these areas, you can easily watch them. Fireflies festival Maharashtra is a seasonal event.

Question 4: Fireflies Festival 2023, how much does it cost to attend?

We have plans ranging from Rs 1000 to Rs 3500, and You can choose a night trek, a road tour, a camping trip, night trail, depending on your preference. We have different options for different age groups and different types of participants. You can email us your requirement at highfive@treksandtrails.org.

The Fireflies forest festival is organized during the early monsoons from May third week to June third weekend. The monsoon clouds and mist add to the beauty of nature's display. The entire state of Maharashtra falls under the monsoon zone, and more than half of it falls under the tropical climate. The festival of fireflies is organized in May and June when the weather is not too hot. The monsoon season is the most favorable time for the firefly display as they seem to be glowing with the most intensity during these months.

Question 6: Which place has the highest density of fireflies in Maharashtra?

Purushwadi Fireflies, Udhewadi village, Siddhagad, have the highest density of Fireflies in Maharashtra as they are located in darker spots ideal for Fireflies.

Question 7: Can you tell me about Fireflies Festival Bhandardara?

Bhandardara Lake Camping and Fireflies is a fun festival and offers a lot of fun and recreation in the lap of nature. The place is surrounded by greenery, with a canopy of dense flora and fauna. The event is replete with activities for families and couples.

It offers many events such as boating, night trails, Camping, and bonfire. The Fireflies Festival Bhandardara is very famous in Maharashtra. During this festival of fireflies, millions of fireflies illuminate the night sky for days. This happens only at a few locations near Mumbai, and this place is one among them.

India is blessed with a variety of destinations. And we are a massive fan of places where we can have sight of fireflies. There are a lot of places in India where you can spot fireflies, but this is one place that offers fireflies and is a must-visit.

Bhandardara Fireflies Festival offers some fantastic sightseeing experiences. You will feel like taking a video and sharing it with someone. But be careful there are fireflies here, so you can't use flash. This is a festival celebrated with several people gathering for this festival. The Bhandardara Fireflies Festival 2022 dates are held from May third week to June third weekend in and around Maharashtra.

Question 8: Can you tell me about the fireflies festival India?

Fireflies are not just a festival but a spectacle, and it is a breathtaking experience for all those who visit this event. The Biodiversity of Sahyadri and the Forest in Maharashtra are the main venues for this Festival.

The first day of the Festival also marks the beginning of the fireflies’ mating season. This is when the fireflies display their breathtaking mating ritual of luminescence for the entire Festival. The fireflies light up the whole area around the Forest, and what sets this apart from the rest is that all of it is natural.

This is even more impressive because you can enjoy this Festival near Mumbai or Pune. The best part is that these fireflies are utterly unafraid of humans, so you can get up close and personal with these mesmerizing little creatures. A light breeze, a large expanse of water, and a sea of fireflies make for a memorable vacation. It is indeed a festival that will stay with you forever.

Question 9: How far is the Fireflies festival Purushwadi from Mumbai?

Purushwadi is located inside the Kalsubai Harishchandragad Forest Reserve. It takes six hours to reach the village; it is 200 km away from Mumbai.

The Fireflies Festival takes place in and around Maharashtra from the third week of May to the third weekend of June. It's a celebration highlighting the firefly, the world's most bioluminescent insect.

Question 11: Can you tell us about the Dang fireflies festival?
In quest of their companion, an endless magical firefly sparkles to display the finest of them. These fireflies are creating a phenomenon akin to a galaxy on Earth.

Witness this once-in-a-lifetime event in the Dangs jungle in South Gujarat, where millions of stars above you and unlimited fireflies all around you will transport you to another universe. Fireflies festival Dang Gujarat is an annual event.

Stay at this beautiful resort, a dreamlike, magical world surrounded by fluffy clouds and the communal hamlet in the Dangs woodland during the Festival.Relax on a hammock, sip locally made juice, and immerse yourself in nature throughout your stay.

Question 12: What is Fireflies Festival Bangalore?
Fireflies, Bangalore's annual music festival, promises to be enthralling. The city is gearing up for a night spent beneath the stars, alongside a tranquil lake, and under a banyan tree with fellow music fans and enthusiasts. Fireflies festival of music is an annual event.

Fireflies have included themes including Peace in Iraq in its inaugural year, water conservation, and tree protection in the past as a closing performance to promote awareness about cause-based concerns.

This year's music festival, which is an extension of the Fireflies ashram's yearly meet or discourse, will focus on the issues of addressing huge food shortages caused by climate change and food sovereignty. Fireflies music festival Bangalore is helping create awareness around the world.

Question 13: Can I join the Fireflies Festival Pune?

We have travel plans available for Fireflies Festival in Pune. You can chat with us at 8828004949 for more details. Fireflies Festival, an annual event in Maharashtra, is the best way to enjoy the beautiful fireflies. The location, near Pune, is a beautiful and budget-friendly spot to enjoy the Festival. Book the tickets today! Please chat with us for updated dates for fireflies festival near Pune.