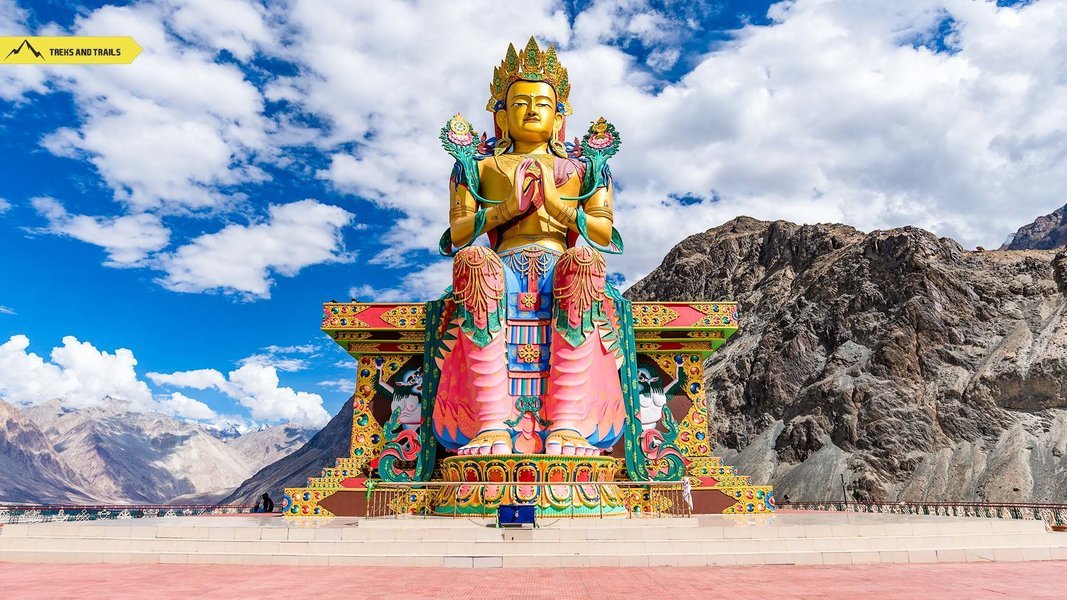 Leh Ladakh Top Of The World

Leh Ladakh the land of high altitude passes in India. Ladakh is also known for barren lands and cold temperature, it offers you the beauty of snow-capped peaks, massive huge shimmering blue lakes like Pangong Tso and Tso Moriri. Ladakh lies at an altitude from 9000 feet to 25170 feet, there is lot to explore in, the Indus & Zanskar River flowing between the valley, ancient monasteries, large stupas, sand dunes, as the first rays of the sun hits the mountains the monks blow their large copper trumpets from the rooftops of the monasteries. It has a very authentic Ladakhi culture which they celebrate in a various religious ceremony. Monasteries interior are filled with unique and antiques arts and sculptures, the great Himalayan range which connects Tibet, china with Leh Ladakh. Ladakh today is one of the most remarkable adventure travel destinations and it can be divided into three main areas for trekking and adventure activities Zanskar famous for Chadar Trek and Kayaking, White Water Rafting with Padam as its central point; the area around Leh for its traditional markets and the Nubra/Shyok Valleys of the Eastern Karakoram.

Arrival at Srinagar airport, meeting with our representative transfer to the Hotel. Afternoon Shikara ride on the Dal Lake, visiting floating market. Overnight at Hotel.

Day Two - (Srinagar - Sonmarg - Kargil)
Leave Srinagar early morning for breakfast at Sonamarg. The drive to Sonamarg is through the Sindh Valley which presents yet another spectacular facet of countryside in Kashmir. Situated at an altitude of 2730 m, Sonamarg (the meadow of gold’) has, as its backdrop, snowy mountains against a cerulean sky. The Sindh River that meanders through the valley abounds with trout and Mahaseer. Sonamarg is the base of a major trek that passes along several mountain lakes – Vishansar, Kishansar, Gadsar, Satsar and Gangabal. Sonamarg is also the take off station for the drive to Ladakh across the Zojila, a major pass in the Great Himalayan Range, through which the Srinagar-Leh Road passes. Continue drive to Kargil (2650 m). Over crossing Zojila pass (3530m), witness the gradual change in the landscape from a green valley to a high altitude cold desert as you move ahead. Just before reaching Kargil, visit the 1999 Kargil War Memorial. Overnight at Kargil.

Day Three - (Leh- Lamayuru- Magnetic Hill)
After breakfast, start the breathtaking drive towards Leh over the barren terrain via Namik-La (3760m) and Fotu-La Pass (4147m). En route visit the giant Maitreya at Mulbekh, Suru Valley (Mulbekh Chamba is a 9-metre-high rock sculpture), the lunar landscapes and Lamayuru which has the oldest monastery in Ladakh. Enroute pass the confluence of Indus – Zanskar Rivers and the effects of Magnetic Hill (Defiance of the law of gravity). Visit Gurdwara Pathar Sahib and Hall of Fame Museum and reach Leh in the evening. Overnight in Hotel.

Day Four - (Leh - Hemis - Thiksey - Shey - Shanti Stupa)
Take a short sightseeing trip around Leh. Some Places to visit:Hemis Monastery: Hemis Monastery is situated in the foothills of Indus at a distance of 45 km from Leh; the monastery has access to motorable roads. Travelling to Hemis monastery itself is a thrilling experience and the surroundings make the journey a memorable one. It is the wealthiest monastery in India and famous for its rich collection of ancient remnants like the statue of Buddha made of copper,
stupas made of gold and silver. Monastery also has sacred Thangkas, murals and various artifacts. Thiksey Gompa: 19Kms from Leh, spectacularly sited, Thiksey is one of the largest and architecturally most impressive Gompas. There are several temples in this Gompas, containing images, stupas and wall paintings of Buddha, which are exquisite. Druk White Lotus School: Also known as Rancho School – 3idiot. The school was damaged in August 2010 when cloudbursts caused flash floods that washed mud and boulders into many school buildings. The Bollywood star Amir Khan made a special effort to lend a helping hand. Shey Palace and Gompa: Situated on a hillock 15Kms upstream from Leh, it was once the residence of the royal family. A 7.5 mts high copper statue of Buddha, plated with gold and the largest of its kind, is installed here. Shanti Stupa: Built by the Japanese government in 1995 and inaugurated by H.H. Dalai Lama of Tibet. Enjoy panoramic views of Leh and surrounding areas of Indus valley from here.

Day Five - (Pangong Tso - Changla - Changthang)
After an early breakfast, we leave for Pangong Lake through Chang La pass (5486 Mtrs). The long easy ascent takes you to Changla pass through its winding roads passing through Sakti Village. Stop at the Changla Pass for a quick photograph session and drive down to the village of Tangtse, where you can relax for a cup of tea. Leaving Tangtse for Pangong you pass through few small villages of Changthang and finally you can have a sudden view of the Pangong lake situated at 14,000 feet (4,267 m). This famous blue brackish Lake of Pangong is 5/6 Kms wide and over 133 Kms long with half of it’s running the other side of the “INDO CHINA BORDER”. One rarely feels so close to nature and environment and the scenery is unforgettable. After the success of 3 Idiots, this beautiful natural location has attracted
more tourists from all over the world. Overnight stay in Swiss Camp.

Day Six - (Chang La - Leisure Day)
Drive back to Leh (150 kms - 5 hrs). Enroute take a short halt at Changla Pass to enjoy a cup of hot steaming tea. Head to Leh after seeing Chang La and reach hotel by late afternoon. Rest of the day at leisure. Overnight at hotel.

Day Seven - (Nubra Valley - Khardung La - Panamik - Diskit - Hunder)
Post Breakfast head out to Nubra Valley via the world’s highest motorable pass - Khardung La. Stop by at the world’s highest café – catch a quick snack and tea and the customary photo shoot. As you continue towards Nubra, you will drop altitude and reach a region that is the most fertile in Ladakh. The drive between Khardung La and Nubra alongside the Shyok river is our favourite. The landscape is stunning, as you follow the Shyok river. Take Lunch halt at Khalsar. En-route visit the village of Sumur which is situated across the Shyok and Nubra Rivers, this picturesque village is famous for the 150-year-old Samstanling Monastery. Founded by Lama Tsultim Nima, the monastery houses 70 monks.
Built on a hill, the Gompa overlooks the valley and has a rich collection of gilded statues, murals and thangkas. Also, visit Panamik, the last civilian point before entering the Siachen Glacier & Battlefield area. View the small Hotspring at Panamik and drive to Hunder. The 7km stretch between Diskit and Hunder is marked by sand dunes which is a surprising sight at high altitude. Ride the unique double-humped Bactrian camels. Check-in at Camp. Overnight in Camp.

Day Nine -  (Leh)
Bid farewell to the enchanting and breath-taking mountainous and rugged terrain of Ladakh, as you transfer to Leh Airport for your onward flight home.

1-Participant with medical history like cardiac, respiratory should consult with doctor before signing for trip.

3-People on sleeping pills, painkillers, sedative, antihistamines are prone to Active Mountain Sickness while sleeping please consult your doctor before the trip

Cost (Per Person in INR)

1. What is the precaution to prevent Acute Mountain Sickness?

Answer- Ladakh is situated on high altitudes, where there is less oxygen and facing issues like acute mountain sickness (AMS), headache, nausea, dizziness, heavy pressure on the chest.

There are few things you need to follow to prevent (AMS)

2- Acclimatize your body by keeping hydrated or being active

3- Always keep your hands and ear open for better acclimatization

7- Intake of proteins and lots of carbohydrates

The best medicine to avoid AMS is to intake lots of water and keep hydrated for better acclimatization. In case if you are suffering from AMS the solution is to descend straight away (800 meters).

2. What are things to carry on a Ladakh trip?

Answer- Kids are preferable to take but not below 8 years, because Ladakh is on high altitude kids do face problems like heavy breathing, fever, headache, so we take kids above 8 years

4. How one can reach Leh Ladakh?

Answer- You can catch a flight from Delhi to Leh

By roadways get down at Manali and take a cab from Manali to Leh via Keylong with an overnight stay at sarchu or get down at Srinagar and take a cab for Leh via halt at Kargil in both the places the journey to reach Leh will take you two days. Roads are open after April ( May to October)

Answer- Yes Inner line Permit we do include

8. What kind of weather is expected in Ladakh?

1-Chilled weather with a cold breeze

9. Vehicles used to travel around the Leh Ladakh region?

Answer- Those people who love to ride a bike for them is the best route one can experience on a road trip to Ladakh.

Answer- There are ATM facilities available in Leh city