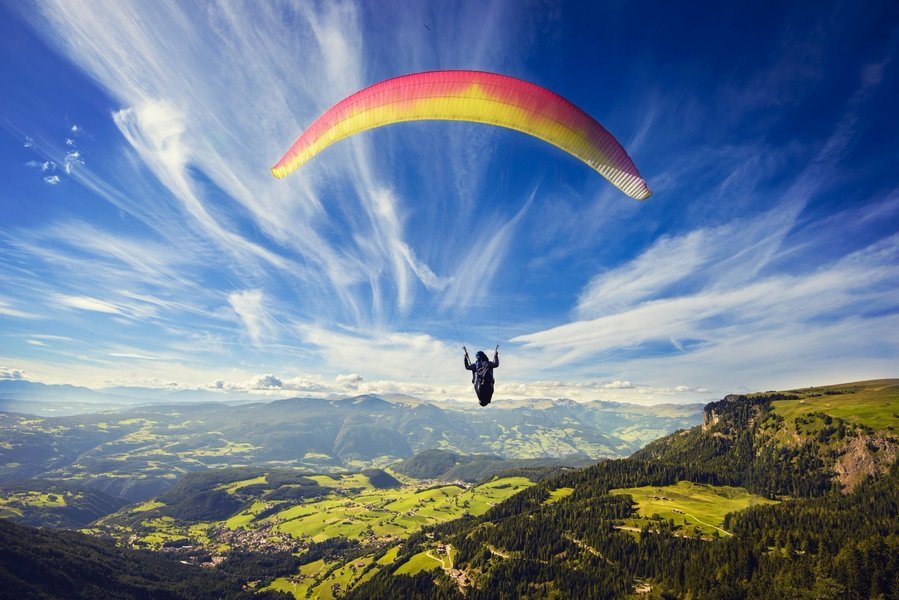 You will be flying with the best team of qualified, experienced & licensed instructors personally trained by the only Internationally certified ‘Master Instructor’ in the country – Avi Malik (ex IAF fighter pilot)

We use certified equipment, constantly evolve our skills to an International Standards

Paragliding is a nature and weather dependent sport. If conditions will not be conducive for flying we may need to postpone the activity for the later days as we will not be compromising with safety.

* 18% GST will be applicable on top of the mentioned cost

―     A two-seater JOYRIDE with an experienced Pilot.

―     It is the most FUN and Easiest way to taste the exhilaration of Free Flight.

―     The Instructor Tandem Pilot will show you how the controls work while flying.

―     You will be given controls to experience how it is to fly all by yourself, but with the safety of the instructor flying with you.

―     Taste the thrills and rush of adrenaline with high speeds and G forces, in this one of its kind tandems.

―     Our specialized Acro pilots will take you through acrobatic maneuvers that are NOT for the faint-hearted.

As Paragliding is a weather dependent sport, wind direction decides which site is suitable to fly. We have been flying in Kamshet for the last 20 years so we are well versed with the wind patterns here. Tower Hill(800-900 feet) (works from October till February) is one of the most popular flying sites in India, close to the old Mumbai Pune highway at Kamshet. The road from the meeting point to the take-off point is a mud road. Vehicles with high ground clearance can only reach the top. We strongly recommend our participants to hire the local vehicle (INR 1200 to & fro per vehicle which accommodates 5-6 participants).

Our other flying site, Pawana, which opens up in the month of March till May is easily drivable and no extra expenses are required to reach the site. You can come directly to the site in your vehicle

Kamshet was just another secluded settlement until the middle '90s, an obscure train station among the vast system of the Indian railways. Fast forward to today, Kamshet is acknowledged as a paragliding near Mumbai harbour in India within the global paragliding community. It is a flying vacation destination due to the enormous advancement in the region's infrastructure and commercialization as Paragliding and an adventure fiesta haven. If you are searching for a paragliding near me destination on your next vacation to Pawna Lake Camping you can book with us your tandem flight at Kamshet.

The topography of India encompasses majestic organic hills, amid the magnificent mountain ranges include the Western Ghats and Himalayas, which renders the landscape spot on for Paragliding. Huddled up in the Sahyadri Mountains of Western Ghats, Kamshet is the finest destination for Paragliding in India. The cherry on the top, Kamshet is positioned at an elevated altitude; therefore, most take-off sites require hiking. When Paragliding near Kamshet is full of vivid skies, mountains, valleys, rivers, and countryside, the landscape beneath and around you makes Paragliding an exceptionally blissful experience.

Kamshet is situated off a primaeval commerce road that connected the west coast to the neighbourhood in the past. The hills along this route are sprinkled with antique cave shrines, passé hill citadels and colonial hill stations. Kamshet is a 'dream come true' for all those who have a strong passion for flying, freedom, adventure nature. Outstanding scenery changes hues along with the seasons in Kamshet. Away from all the hustle and clamour, pollution and only hills, lakes and great gusts reckon Kamshet as a utopian land.

Kamshet is the top destination in India visited by paragliding enthusiast to learn and master this adventure sport. Set on an energizing encounter of Paragliding in Kamshet with a bunch of qualified pilots and flying experts. Paragliding in pune kamshet is not available during the monsoon season. Paragliding in Pune Kamshet price rs 2499 on weekday and 2999 on weekends limited seats.

Everything that you need to know about Paragliding in Kamshet

We humans always desire the things which are unreal and beyond our reach. Ogling at a bird soaring high in the sky, haven't you wanted if you could fly? Visualizing how mind-boggling the world would look from up there. Flying remains one of humanity's most vivid and wildest fantasies. While getting wings is not possible, but there is something you can do to get the same thrill. Did you realize that there is a way we can encounter the nerve-wracking sensation of sailing high up in the sky? Thanks to the Avant-Garde inventions, you can hover over the swanky green mountains and savannahs of destinations like Kamshet, Lonavala, and beyond with Paragliding. Paragliding Mumbai it is ideal destination for Mumbaikars easily reachable from city. Paragliding in Mumbai is growing in popularity with regular travelers and many enthusiasts enrolling for the pilot course.

Paragliding near Mumbai is one such outrageous adventure sport that grants us to encounter the exhilaration of flying. Paragliding in Kamshet will present you with an opportunity to take off over magnificent mountains, old-world minimal wooden houses, lovely valleys, the Indrayani stream and the magnificent Pavna Lake.

Between all the outrageous activities, Paragliding holds its prime spot in Lonavala. It is free going with the guide of a straightforward manufactured speciality parachute. Paragliding is one of the most blazing air sports, and one of the least demanding. It is gaining momentum and expanding over the most recent 15 years both as a sport and an open-air movement outdoor recreation activity. At present, there are no chaotic procedure, rules, or anything of the sort that disposes of the pleasure and freedom of flying. All you require is the will and leisure time, and you will encounter astonishing undertakings, travel far and wide, and challenge yourself while soaking in the stunning view, while you're flying over Pawna lake or Kamshet slopes.

The tandem is curated for individuals who want to take off smoothly, similar to a cheerful fowl, appreciating the incredible scene underneath without a great deal of trapeze artistry. Take in the ecstasy existing apart from everything else with this profoundly mainstream tandem. Kamshet paragliding rates are Rs 2499 on weekday and 2999 on weekends. Tandem paragliding in Kamshet available on all days of the week prior booking required to confirm activity.

Regardless of whether you are a novice to Paragliding or have been paragliding close to Mumbai and Pune previously, the experience that anticipates you in Kamshet is nothing similar to you've attempted yet. The incredible scene, fantastic atmosphere, and adrenaline that comes from Lonavala Paragliding in Kamshet is something that you will cherish for the remainder of your life. So, what are you waiting for? Paragliding in Manali gone are the days where travellers from Maharashtra had to travel till Himachal Pradesh for Paragliding, You can now enjoy the sports in Kamshet. Kamshet paragliding season is from October to April, it is not available during the monsoon season.

1. How to reach Kamshet Paragliding?

For those living or visiting India's western compasses, Kamshet and close by destinations are the ideal spots of Paragliding. One can arrive at Kamshet through the public or private vehicle. Paragliding Pune thrill seekers most sought destinations.

By Air - Pune is the closest air terminal to arrive at Kamshet at a distance of around 55 km. Private taxis can be recruited to come at Kamshet from the airport. Chhatrapati Shivaji International airport in Mumbai is the international airport. Flights link both Pune and Mumbai to all the significant urban metropolises in India.

By Train - Local train network run among Pune and Kamshet routinely. In the case of heading from Mumbai, you can board a train to Lonavala and after reaching there, get a local train to Kamshet.

By Road - Kamshet is about 110 km from Mumbai and 45 km from Pune. It is about 16 km ahead of Lonavala. The hill station is well connected to Mumbai and Pune by both private and state-owned buses. One can arrive at Kamshet via through the Mumbai-Pune highway. Paragliding at Lonavala is popular among the adventure seekers.

2. Ideal Season for Paragliding in Kamshet?

June to September is rainy season in India, the suggested Time for Paragliding in Lonavala and Kamshet is October to May. During winter, which is among October and February, the thermic conditions are astounding for supported coasting; and in March through May, the more blazing days advance quick speeding up and taking off, particularly if you get a reliable breeze, some blowing over 20 km for per hour!.

One can learn strong wind flying and ground handling skills in these conditions.The tropical savanna atmosphere implies that the territory is around 30 degrees Celsius consistently, yet April is the most blazing month. In January, Kamshet can be cold, with the most frigid days being simply over 10 degrees Celsius. Kamshet paragliding charges are 2499 on weekdays and 2999 on weekends.

3. How difficult is Tandem Paragliding?

Tandem Paragliding the pilot will be controlling the flight you have to follow his simple instruction while taking off, during the flight and landing. All controls will be with Paragliding pilot. It might be difficult for people with a fear of height. Kindly check your health, weight and fitness before booking as the booking is not refundable.

After you complete your booking we will email you the onsite manager number and paragliding location GPS coordinates. The take off location changes depending on the wind and season. Location we fly from Kamshet tower hills, Kusgaon hills, Karanjgaon hills, Shelar site or Pawna lake hills. These places are around 15 – 22 km from Lonavala. Kamshet location is the best Paragliding near Pune. Kamshet paragliding site change according to the seasons.

7. Recommended clothing for for Kamshet Paragliding?

You can wear T-shirt, shorts, track pants or Jeans. Kindly do not wear Saree, skirts due to windy condition. You should wear shoes, please avoid wearing chappals and a cap. You also need to carry sunscreen, glares, snacks and water bottle and a Camera to take pictures.

Please Note that paragliding is a wind dependent sport and there’s a possibility of last minute re-schedules or cancellations, which are beyond our control. Kamshet paragliding timings depend on the wind conditions and season. One session in morning if winds are favorable and one in evening is available.

There are many beautiful destinations for Paragliding across the world we have listed a few of them below.

10. Do you offer Paragliding Course at Kamshet?

Learn paragliding in kamshet, Yes we offer Paragliding course at Kamshet to learn more email us at highfive@treksandtrails.org. Paragliding training and certified course are available. Kamshet Paragliding school in India has created the most number of pilots.

You can use the below paragliding hashtags for your amazing videos and images created after your Tandem Flight.

12. Do you have the link for Paragliding Funny video?

13. Top places for Paragliding in India?

Here are the top destination for Paragliding places in India

15. Can we book Kamshet Camping and Paragliding? 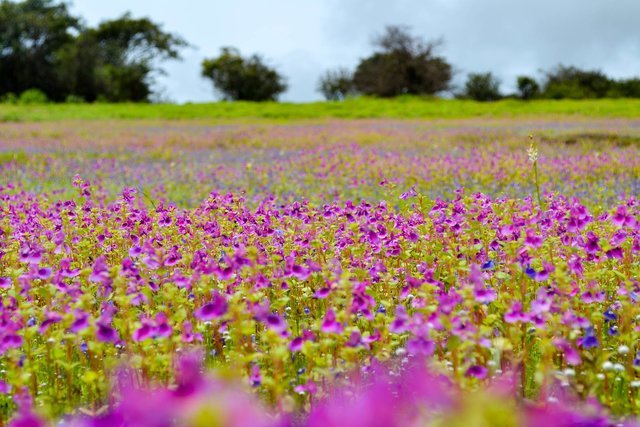 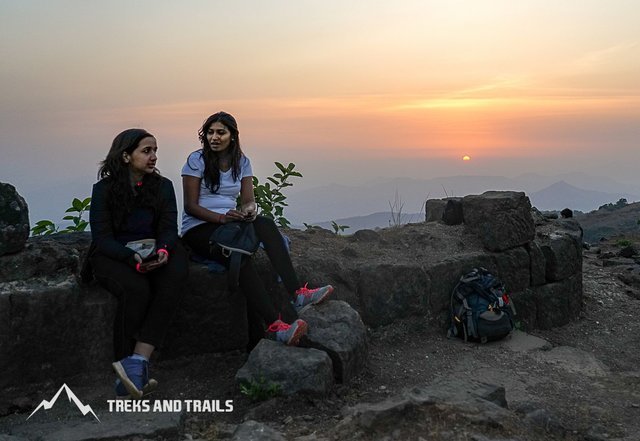 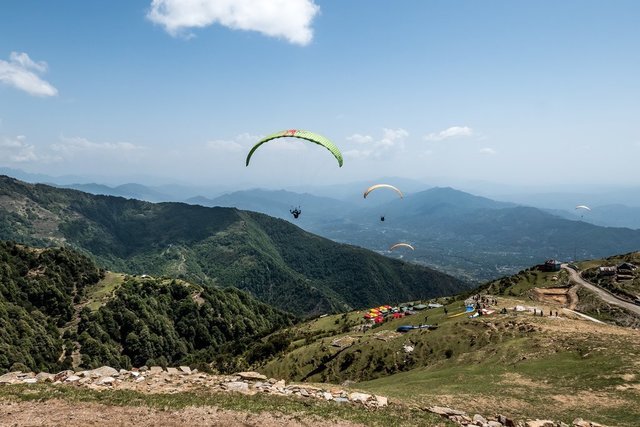