Mumbai is blessed with many great trekking trails we have listed few trekking spots near Mumbai which can be done by people from any age group.

Lohagad “Iron fort” is one of the many hill forts of Chhatrapati Shivaji Maharaj. It divides the basins of the Indrayani and Pavna of the Sahyadris range. The Visapur fort is located on its eastern side. The four large gates of Lohagad are still in good condition and reasonably intact. Historical records show that in the later Peshwa period, Nana Phadnavis (1742-1800 AD) built several structures in the fort.

How to Reach Lohagad Fort:By Train nearest station is Malavli after Lonavala and by Road Mumbai Pune Expressway 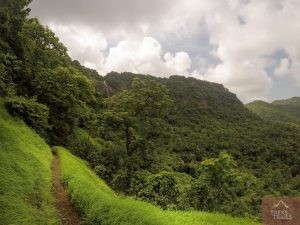 This fort is said to exist since the Satavahana dynasty. In the books it is mentioned in the Treaty of Purandar 1655 AD where Chhatrapati Shivaji Maharaj gave 23 forts to the Moghuls. It is also said that Sagargad Fort was later given to Angre, the naval chief of the Maratha's in return for loyalty against Shahu Chhatrapati of Satara. In the mid-19th century the British took the fort and built retreat homes on it. Also located on this fort a Temple of Siddheshwar, a river flowing by, and most of all a cliff just behind the temple where the river becomes a waterfall water cisterns Pandav kund, Vanartok Pinnacle. This hill fort commands a steering view of the entire Alibaug region and is still not a seafort,

How to Reach Sagargad Fort

Khandale village is situated on the Mumbai – Alibaug road. While travelling to Alibaug, one can reach Khandale village after crossing Karla pass. The village is about 4 miles from Alibaug. Since the road to the foot of Sagargad is unpaved, we can reach there by car except in monsoon. After crossing a small stream here, one has to climb up on stairs built in rocks. After about half an hour the path splits 2 ways. The way right takes us to a point where we can see beautiful the Dhondane falls. And the way to right takes us to the fort top. Tikona Fort Height is  3500 feet and it is a type of Hill Fort.Grade of Tikona fort is quite easy.Duration of the fort trek is about 1 hour and 30 minutes one way and the region is Kamshet maval

What to see on Tikona fort Trek

How to Reach to Tikona Fort

You can take public transport from Pune and Mumbai as well till Kamshet and then to Tikona Village by sharing vehicles.

The main route to the fort is from the village of Tikona Peth. To reach this village, alight at Kamshet, which is two stops ahead of Lonavala on the Mumbai- Pune rail route. From Kamshet railway station, take a bus / shared private vehicle (jeep) to Kale colony. One can also get a vehicle to reach Tikona Peth from Kale colony.

A bus at 08:30 a.m. at Kamshet bound for Paund or Morsay is convenient for reaching Tikona Peth. From Tikona Peth the fort can be reached in about 45 minutes. This straight route is quite simple and not at all tiring. After passing through the entrance door, a path leads towards left and takes us to the citadel in about 20 minutes. 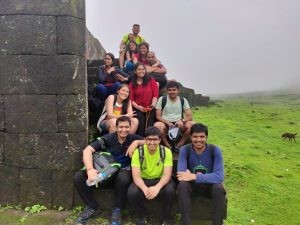 Visapur Fort height is around  3500 feet & it is a type of Hill Fort. Visapur Fort Region is Lonavala.Duration of the trek is about 1 hour and 30 minutes one way

Visapur Fort is larger and at a higher elevation than its twin fort Lohagad. Within the fort are caves, cisterns of water, a decorated arch and old houses. These two roofless buildings surrounded by outer or veranda walls said to have once been Government offices. The ruins of a large stone-built house are known as the Peshwa palace. In addition to a huge carving of Hanuman, there are also several temples dedicated to him scattered all over the place. Hanuman or Maruti was likely the patron deity of Visapur fort. There is a well which local legend says was built by the Pandavas.

How to Reach Visapur Fort

This site uses Akismet to reduce spam. Learn how your comment data is processed.