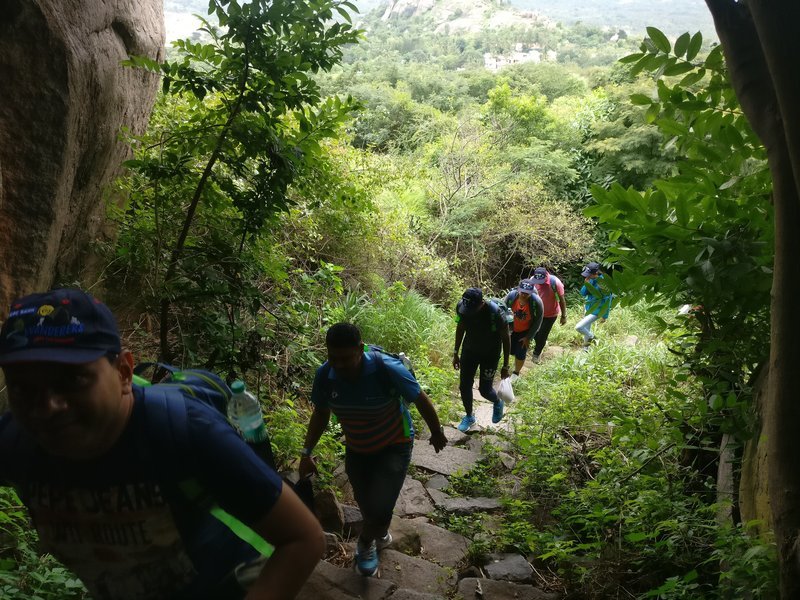 One of Karnataka's greatest day hike, the Uttari Betta is a 5 kms trek across a spectacular lush green landscape that offers quite unique scenic views similar to western Ghats. The trek starts from a small village, entering the fort wall and passes through seven doors of stone to reach the halfway point of the hike which has a temple of Shankareswar at the top. The view from the temple top is beautiful enough to seize your mind for a moment. Once we cross the temple, the trek continues ahead crossing a small jungle-cave, experiencing a whole new unexpected world and ends at the grassland top of the hill which is surrounded by huge boulders. After spending some time at the top with little chit-chat and pack lunch, we begin to descend back towards the base point of the trek.

What does our expert say about Uttari Betta Trek?

We begin the trek at night and aim to reach the top just before the break of dawn. The trek starts from a little town. After strolling for a reasonable amount of time in the dark through the village, you will be entering the fortification barricade and pass through seven entryways of stone. The trail is mostly shaking by going over boulders and steps cut into massive rocks. Once you cross these doors, you will arrive at the midpoint of the climb, which has a temple of Shankareswar at the top. The view from the temple apex is sufficiently brilliant to clutch onto your brain for several moments. When we cross the sanctuary, the path continues ahead, passing a little forest cavern, encountering an entirely different surprising world, and finishes at the grassland on the summit of the hillock, encircled by large stones and boulders.

We will witness the dazzling dawn at this summit, with just green grass, clear blue skies, and grey coloured huge rocks for accompanying us. Embrace this awe-inspiring moment for as long as you can, as it will help you remember the supreme harmony you felt at that point later in nostalgia.

Following the beautiful dawn, with an enchanting blend of hues in the sky, we let ourselves devour in its excellence. Rapidly after this, we will start our drop back to the base camp. Try to proceed cautiously while being captivated by the magnificence of the slopes. We will stop in between to have breakfast and afterward set out for Bangalore.

What Wikipedia Can't Tell You About Uttari Betta Trek

The best months to visit Uttari Betta, The Betta is beautiful throughout the year. The best months are July to February as, during monsoons, one will be able to witness the lush greenery and experience walking amidst the clouds. During the winter months, the atmosphere is charming and balmy. Uttari Betta sunrise trek is popular during summer months for beautiful cloud formation and to avoid intense summer sun during the day.

By Road: 75 kms from Bangalore. Uttari Betta situated off the Kunigal-Magadi state highway S.H. 94, at a distance of about 7 km from it and 10 km from the Anchepalya industrial area on the Bengaluru-Mangalore National Highway India - NH48 near Kunigal.

By Air: Kempegowda International Airport, Bangalore. You can easily take a bus or taxi from Bangalore city to arrive at the base camp of the trekking trail to Uttari Betta.

Can you tell me more about Hurti Betta or Uttari Betta?

The outskirts of Bangalore has numerous hiking trails that offer adventure buffs with various opportunities to trek, take a stab at rock climbing and hone their photography skills. One such fantastic hiking trail is Uttari Betta from Bangalore that explores through an awesome vibrant green scene and has extraordinary vistas akin to the Western Ghats. Uttari Betta, the barricaded fort hill, which is also known as Hutridurga is in the south-east of Kunigal, 3708 feet tall, which makes it the most famous trekking trails in Karnataka. It is a five km excursion that takes you through the flourishing countryside, the wrecks of centuries-old fortifications, lakes, peaks, and much more. Kempegowda constructed Hutridurga in the sixteenth century. Originally, Huthridurga Fort was the military citadel of Tipu Sultan against the British, which was conquered by them in 1791. It is considered to have been a seven-layered fortress and is viewed as one among the nine "Durgas" (fortified slopes) around Bangalore ("Nava Durgas"). When you arrive at its peak, you will discover the sanctuary of Shankareswara alongside a Nandi symbol, which worked around 1260 A.D.; this landmark devoted to Lord Shiva. You will likewise find an Anjaneya sanctuary, on the path to the top.

This trek bestows trekkers with staggering vistas that engrave onto their psyches for the remainder of their lives. Not only is this trek a super ace of picturesque perspectives; however, it likewise excites you with the noteworthy fortification dividers and mind-boggling stone steps. An intriguing certainty is that this slope post is said to have eight passages from the base to the top and a few external entryways. The summit conveys a broad perspective on the scene specked by an enormous number of slopes. One can also spot diverse species of insects, birds, and mammals, including bear, leopard, and wild boar.

Uttari Betta location around 90 kilometers from Bangalore. It takes around two hours to cover the distance. Huthri Betta Trek, KEMPE GOWDA FORT, Hutridurga sunrise point, Shankreshwara Temple Kunigad, can use these landmarks in google maps to reach the Kunigal village for the trek.

Kindly search for Kunigal village on google maps. If you search Uttari Betta, you won't find the location you will need to enter Huthri Betta trek.

Trekking near Bangalore is popular among the hiking community. There are many good option available very closeby to the city. You are looking for attractive trekking spots near Bangalore. There are a variety of locations on offer. There are one-day trekking option, and some are available for night trekking during the summer months. Trek near Bangalore gives us something to look forward to on the weekend.

The trek is moderate difficulty with average endurance required. You should pack according to the things to carry mentioned in the itinerary. Please wear good trekking shoes for this trek. Also, carry two liters of water and ready to eat snacks for energy.

5. Can you tell me the Uttari Betta summit height?