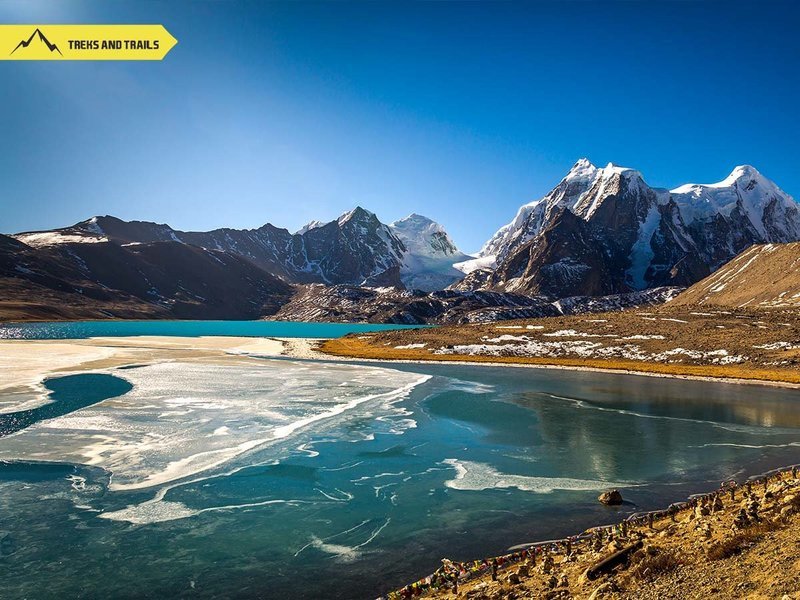 Sikkim is one of India's smallest states. It actually ranks as more of a region than a state, but still enjoys a great deal of autonomy from the rest of the country. This northeastern area is outfitted with dense forests, snow-peaked mountains, and some stunning holy shrines like Pemayangtse to see while you're there. Sikkim ushers in the highest point in India: Kangchenjunga peaks at an impressive 8,586 m!

Arrive at Bagdogra Airport and head towards Gangtok. Overnight in Gangtok.

After breakfast, head towards Lachen. sightseeing along the way. Overnight in Lachen

After breakfast, visit Gurudongmar Lake via Chopta Valley. Later in the evening, make your way to Lachung. Overnight in Lachung

After breakfast, a half-day excursion to Yumtang Valley (Valley of Flowers). Evening head towards Gangtok. Overnight in Gangtok

After breakfast, head towards Gangtok. Full-day excursion to Nathula Pass and Tsongmo Lake Overnight in Gangtok

After breakfast, head towards Pelling. sightseeing along the way. Overnight in Pelling

After breakfast, excursion to Pelling. After that, head towards Darjeeling. sightseeing along the way. Overnight in Darjeeling

After breakfast, head towards Bagdogra Airport.

Most people coming to Sikkim prefer to fly. There are very few trains that come here and if there are any they are not daily. Most people use buses to get around but it is more expensive than the other ways of traveling.

The nearest airport to Gangtok is Bagdogra Airport (IXB).This airport is known as the Siliguri Airport. It's about 120     KM from Bagdogra Airport and will take over 4 hours driving on the road due to it being in the mountains. Sikkim has its own airport as well, which is only 30 KM away from Gangtok. Its name is Pakyong Airport ,but this airport has very little connectivity of flights with major cities like Delhi, Kolkata ,Mumbai ,Bangalore ,etc.

2. Why do Indians require permits to visit Nathula, Gurudongmar Lake, and other Sikkim protected areas?

Due to the fact that Nathula and Gurudongmar lake are close to the international border of China, Bhutan and Nepal   Tourists from all over the world need permits to visit these areas.

Sikkim is the most uncompetitive market to enter. They not allow private vehicles on public roads located in protected areas of their state.


4. What is the best season to visit Sikkim?

5. How many minimum days are required to explore Sikkim?

There are many fantastical destinations in Sikkim that attract tourists from afar: Gangtok, Lachen, Lachun, Yumthang    Valley, Nathula Pass, Gurudongmar, Namchi and Pelling to name but a few. You’re bound to get lost in the sheer beauty of these destinations and can easily spend at least 8-10 days exploring each location. North Sikkim is very famous amongst tourists because it takes a minimum of 6 days to cover all the famous locales.

6. What is the local food of Sikkim?

7. What is Sikkim famous for?

Sikkim is known for its peaceful nature, simplicity and pleasant climate throughout the year.Sikkim is famous for      Kanchenjunga, the third highest mountain in the world at 8586m, beside this it offers a tremendous variety of  plants   and wildlife with a diverse mix of rich culture and traditions. Apart from this Sikkim has been blessed with verdant valleys, refreshing air, serene ambiance and snow-clad peaks.

8. Is Jio network available in Sikkim?

Jio works well in Sikkim. In areas where Jio is supported you will get 4G internet connectivity and a calling network.

P.S. There is no network connectivity at Changu Lake and Nathula Pass.

9. Do we need Passport for Sikkim?

Passport is not necessary for Indian nationals to visit Sikkim. If a person has a voter ID card or driving license then    they can get the required permits.

Yes, Sikkim receives snowfall during the winter. Typically, snowfall starts in December and lasts into February. The temperature can fall as low as -7 degrees Celsius at this period. Although there is snowfall in the lower parts of the state, it is heavier in the higher elevations of the Himalayan range. Tourists travel to Sikkim mostly to experience the snow-covered landscapes and participate in winter sports like skiing, snowboarding, and snowmobiling.

Sikkim is a picturesque state in India's northeastern area, with Gangtok as its capital city. Here are some of the finest locations to visit in Gangtok, Sikkim:

12. What are the most popular things to do in Sikkim?

Here are some of the most popular things to do in Sikkim:

13. Weather and temperature in Sikkim year around

The weather and temperature in Sikkim vary depending on the season and elevation.

Winter (December–March): 0–5°C. In the mountains, heavy snowfall makes travel difficult. However, skiing and other winter sports are preferable.

Note that higher elevations, like Nathula Pass, are always colder than lower elevations. Before traveling, check the weather forecast and pack accordingly.

14. How many days are ideal for Sikkim?

Sikkim is frequently cited as being among the most visually appealing locations in all of India. It will take you somewhere between 12 and 15 days to completely explore the state's most prominent tourist attractions.

One of the main reasons why Zero Point is famous is because of the panoramic views it offers of the Himalayan range, including Mt. Kanchenjunga, the third highest peak in the world. The place is also famous for offering a glimpse of the snow leopard, which is difficult to spot as it lives in remote and high altitude.

16. What are Sikkim's most beautiful and spiritual monasteries, trekking destinations, and villages?

17. What are the popular dishes of Sikkim cuisine?

The cuisine of Sikkim is a unique blend of Indian, Tibetan, and Nepalese flavors. It is known for its use of fresh, locally-sourced ingredients, and is characterized by its spicy and flavorful dishes. Some popular dishes from Sikkim include:

Momos: These are steamed dumplings filled with meat or vegetables, and are a popular street food in Sikkim.

Thukpa: A hearty noodle soup that is often made with vegetables and meat or chicken.

Phagshapa: A traditional dish made of pork and radishes.

Dhindo: A thick porridge made of corn or millet flour, served with meat or vegetables.

18. What are the transportation options available to reach Sikkim by rail, road, and air?

Here are the ways to reach Sikkim via rail, road, and air:

Rail: The nearest railway station to Sikkim is New Jalpaiguri Railway Station (NJP) in West Bengal, which is well-connected to major cities in India. From NJP, one can take a taxi or bus to reach Sikkim.

Road: Sikkim is well-connected by road to major cities in the neighboring states of West Bengal and Assam. Regular bus services are available from Siliguri, Kolkata, and Guwahati to Gangtok, the capital city of Sikkim.

It's worth noting that visitors need to get the Inner Line Permit (ILP) to visit certain parts of Sikkim. It can be applied online or in person at the Sikkim Tourism office in Gangtok.