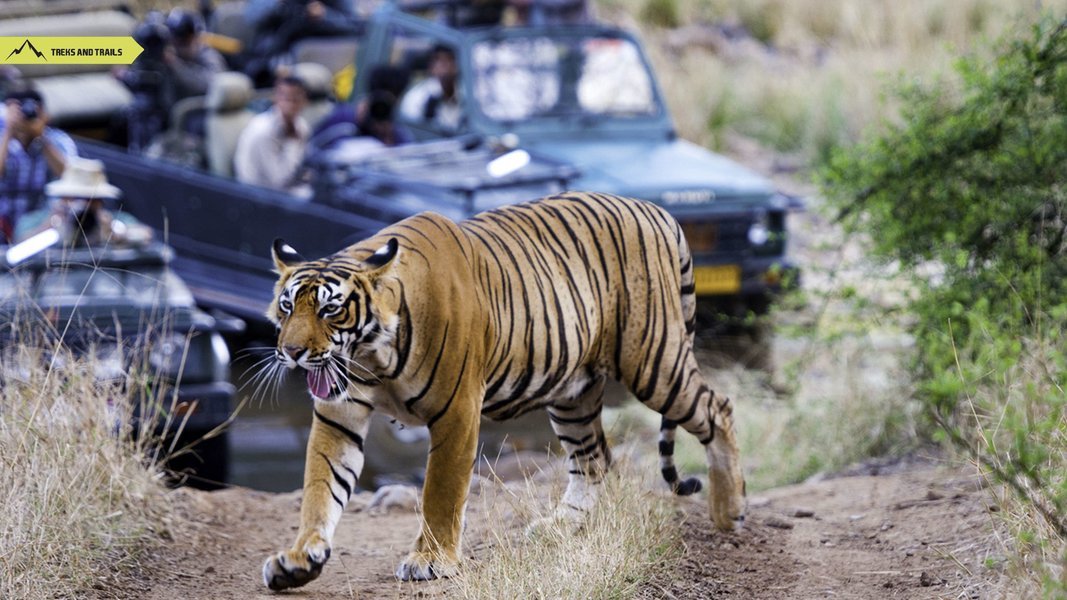 Ranthambore National Park famous for Tiger Safari located in Sawai Madhopur, Rajasthan.  It was earlier known as Sanctuary of Sawai Madhopur but, later declared as the part of the project to preserve and protect Tigers in 1973. Then, the Ranthambore proclaimed a nationwide park. The Aravalis hill and Vindhyas spheres envelop the park.

The Park area spread over 1410.64 square kilometers. The Ranthambore national park is situated 160 km away from the Jaipur airport and only 11 km away from the railway station which is in Sawai Madhopur. On the map, the location coordinates of this park are 26°01′02″N 76°30′09

The affordable itinerary, for a visit to the Ranthambore national park, comes with a package of two nights and three days. On the first day, you with other fellows would be picked up from Sawai Madhopur at 10:00 am. They will take you to the Ranthambore national park, in a private vehicle. Time would be accommodated, for the check-in, rest and lunch, after which you, along with other fellows, will leave for first Wildlife Safari. In the evening, you would be back from the first trip. The day ends, with a first-class dinner.

On the third day, everyone would have to leave for the fourth Wildlife Safari early in the morning. After the last trip, your luggage would be checked-out and kept safely in the vehicles. After lunch and post-lunch, you would be dropped to the Sawai Madhopur by a private car.

The biodiversity and nature of the Ranthambhore national park that it has gathered, with care, make the park unique. Making the place a secure habitat, for many animals and a protected breeding ground for them. The NGOs and government forest department work day and night, to maintain the fresh and clean ecosystem of the park. The park divided into two different forms of plantation.

One is Dry Deciduous forest, and the other is the open grassy-meadows. According to reports and analysis, 539 different kinds of flower species found in the region. The trees that majorly seen in the area are Dhok trees. Other species of plants that grow in this park are Sal, Mahua, Imli, Banyan, Khiar, Jamun, Palas.

The large and increasing population of tigers makes the Ranthambore national park well-known around the world for tiger safari. The biggest tigers hub in Asia, which is a result of the project tiger, started by the government of India in1973. Till 2008 there were only 48 tigers including adults and cubs both as per the consensus in 2014. But, after the support of government and NGOs, the tiger count in the region has reached up to 62 tigers.

Ranthambore national park consists of a wide range of animals, birds, and reptiles living in it. Along with the tiger, other mammals that commonly found here include Jungle cats, Caracals, Chinkara, Jackals, Long-eared Hedgehogs, Blackbucks, Sloth bears, and Chital. Moreover, some unique animals or rare types of animals that you will find roaming in this space are Hanuman Langurs, Indian False Vampires, Indian Flying Foxes, Indian Gerbilles, Small Indian Mongoose and Indian Mole Rats.

Ranthambore, being a vast terrain, contains many small and large water bodies. As a result, it has an even population of birds, of which some are resident, and other includes migrants. According to a document, more than 270 different types of birds live in the park. The people have discovered some fantastic high altitude places or spots. These spots are best known to see these birds around the region.

Open Jungle Safari Park is a major attraction for the people and the most popular option to detect the animal movement. There are 10 zones where you can enter the national park. Department of Forest(Government of India) controls and manages the safari booking of Ranthambore National Park. You can also book a safari online, by filling a permit form. You need to fill all the boxes with the details required. A valid Identity Card would be required to check the validity and as proof of the details provided.

Rules and Regulations of Gir National Park, Travellers cannot get down from the vehicle during the whole safari tour. Moreover, a set of rules and regulations are to be followed by every tourist. As the tourist guide is aware of all the practices, so you need to follow the guide’s instructions. There are different gates to enter the national park with unique names. You can only explore the region allocated to the safari gate you come through. Exploring multiple zones in one safari is not allowed as per the regulations of the park. The cars would enter and exit the park, from the same gate. Gypsy jeep charges are to pay on the spot along with safari gate charges, camera fees, and guide fees.

The Climate of Ranthambore is extreme with hot summers and colder winters. Tropical monsoon climate is experienced, with heavy rainfall in the region. From March to June the weather is around 30 to 45 degrees. While in winters the temperature ranges from 4-25 degrees. The monsoon season occurs, from June to September and the recorded rainfall is1000mm. During the rainy season, the national park closed.