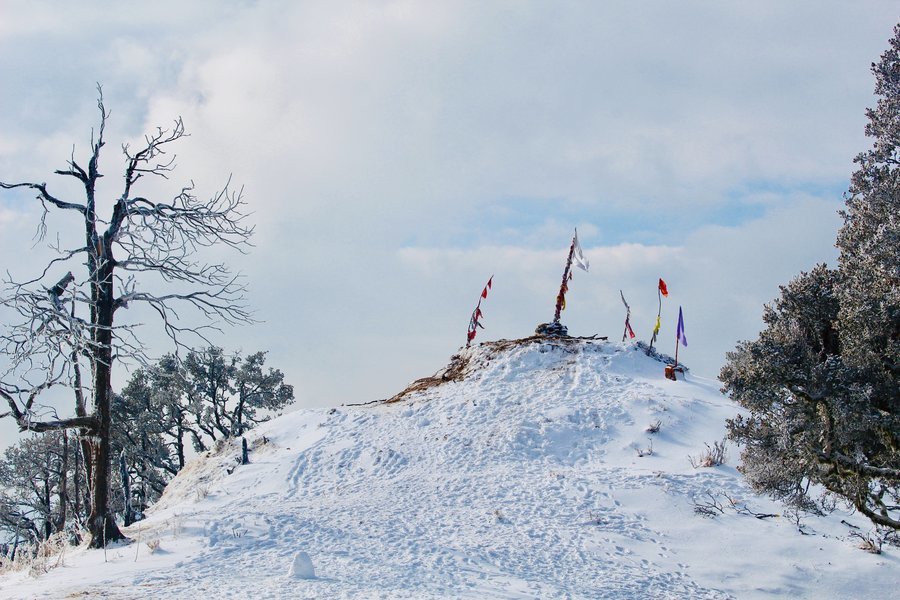 Nag Tibba lies on the foothills of the Garhwal Himalayas, North-East of Mussoorie. The peak is at an altitude of 3100 m. It offers spectacular views of Mussoorie, Vikasnagar, the Banderpoonch range and spurs created by the Yamuna river valley. Nag Tibba is a typical ridge peak on the Nag Tibba Range of the lower Himalayas. In fact, along with the Pir Punjal and Dhauladhar, the Nag Tibba range forms one of the 3 main ranges of the lower Himalayas. It is mentioned in the very famous book '7 years in Tibet' which chronicles the escape of Austrian climber Hienrich Harrer from the British jail into Tibet.

There is a temple dedicated to Nag Devta and the range owes its name to this temple. Snakes have always held an important status in the Hindu religion. According to Hindu mythology, snakes are considered as the representation of rebirth, death and mortality, due to its casting of the skin and being symbolically "reborn". Since the days when religion and worship was a response to a way of life rather than a reason for existence; snakes have been given a cult status. In some places snake gods are associated with fertility. There are many snake god myths and iconographic symbols associated with them in the Hindu mythology like that of Sheshnag( Vishnu's resting couch),ananatnag( the endless snake), Kaliya( Krishna's dance),Vasuki (churning of the ocean), Padmanabha ( guardian snake especially in south India), Manasa devi( snake goddess) etc. For the villagers in this part of the mountains he is the protector of their cattle and sheep. Domesticated animals are their biggest assets and Nag Devta their protector.

We begin the day early from Dehradun so that we can avoid the traffic towards Mussoorie and Kempty falls. Mussoorie is 22 km from Dehradun and Kempty falls another 17 km ahead. The road continues downhill from here towards the Yamuna river bed and reaches the town of Nainbagh. One road continues towards Yamunotri while we take the narrower road which climbs uphill towards Pantwari village. This takes us behind the Mussoorie ridge and into shepherd territory. Gujjars with their domesticated sheep and goats are seen on hill tops. Terraced farms and hill slopes dotted with Bauhinia trees with their purple blossoms are a sight to photograph. These flowering trees are easily identified by their leaves which are in the shape of a camels' foot.

After a total of three and a half hours' journey from Dehradun, we reach Pantwari village and begin our ascent to our camping site. One can enjoy the village setting and life. Women are seen working on the wheat and green pea fields. Men are mainly employed in government jobs in the plains or work as porters and guides. Our trekking trail rises beyond the farms and enters wild territory. Flowers and birds are in plenty here. Most prominent flowers are white anemones (a flowering shrub) while among birds the jungle babbler, red vented bulbul, blue cheeked bulbul, hill myna, warblers and tits are common.

The trek begins from the main road that cuts through village Pantwari itself. The trail climbs high up across the ridge face, right behind the village Pantwari, in the eastern direction. After a walk of 5 minutes we leave the main village behind. The trail is rather steep until almost halfway today, or until we arrive at the Goat Village on our left, an initiative started to sustain the way of living in the Himalayan villages, which is increasingly threatened by migratory trends. The trail up to this section is exposed with few areas with natural shade and it can be slighlty unpleasant during sunny days.

The trail is rather level around the Goat Village and soon after we cross the forest checkpost a little further up ahead, we enter a dense forest with plenty of Rohdodenderon trees with bright crimson red flowers, found in full bloom during late winters and early springs, i.e. Feburary to April. The trail is mildly steep from here until the Kathian Campsite.

We reach our camping ground by late afternoon and enjoy the sunset over the hill spurs. The camping ground is flush with mint leaves which can be mixed to form a delightful brew of mint tea or the Kandali shrub can be washed and cooked to form a tasty saag.

The campsite at Katian is famous for the marvellous sunset views that can be seen from here and is a highlight of the Nag Tibba trek. The colors come out beautifully during the evening twilight hours.

Day 2 - Trek from campsite to Nagtibba top(3,020 m) and back to Pantwari; Drive back to Dehradun.

We start the second day post breakfast and climb to the Nag Devta temple. It is an ill maintained temple premise with a pujari, who is present occasionally. The locals come here frequently to pay their obeisance. There is a vast open space near the temple which is often used as a grazing ground for sheep and goats. The Nag Tibba ridge rises further up and is another 1 hour of journey ahead. There is a distinct change in vegetation from here. The forests become dense and is dominated by oaks and rhododendrons. The forest floor is also damp indicating the lack of sunlight reaching it.

This is an ideal habitat for a variety of orchids (locally called kachanar) to grow. However, with the pressure of grazing, lopping of oaks and trekking, this region is under anthropogenic pressure. A variety of birds like the niltava and flameback woodpecker are seen in the barks of oak trees. We follow the trail back to our campsite and after lunch head down to Pantwari village. The trek down is easy and fast and can be covered in a couple of hours. We then proceed onwards to Dehradun by our transport. 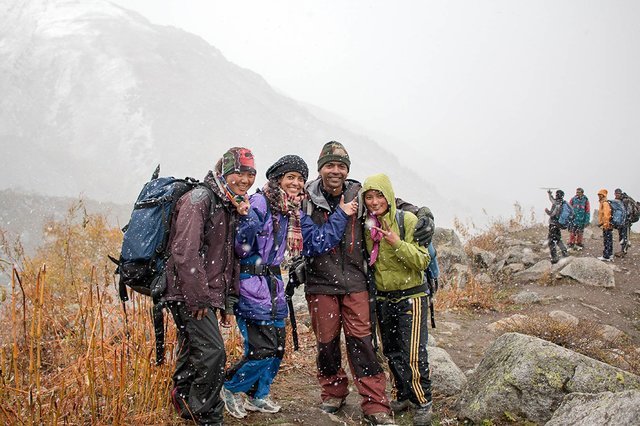