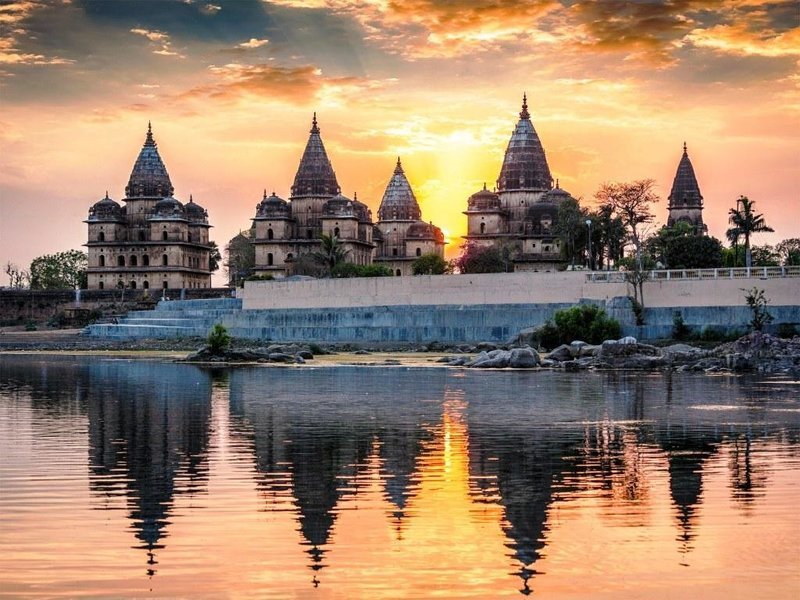 Jhansi is the land of courage and grit of a fearless Queen. The land that speaks about the queen who refused to bow down to the Britishers is proudly nestled between the rivers of Pahunj and Betwa. Being the Capital city of Rani Laxmibai's Kingdom, Jhansi leads the way to the region of Bundelkhand. The other prominent areas are Panna, Khajuraho, Orchha, which come under the Bundelkhand region.

The Chandel Dynasty's artistic grandeur is evident in the structures and monuments that glamorize the city with their presence. Apart from the famous temples, churches, museums, Jhansi is also home to the Indian Army, the main base there.

The city voices Rani Laxmi Bai's valor personified and fought till her last breath to save her kingdom. This land is home to many heroic stories of the Maratha Kingdom in the history of India.

Orchha The Land of Temples
Apart from Jhansi, we also intend to explore Orchha. The land is known for its ancient temples and miraculous folklore stories. Situated on the banks of River Betwa, the old structures and the history that speaks through them will leave you spellbound.

So here we go, a backpacking trip to both these lands is on the cards. If our dates don't suit you, we make sure you never miss exploring these beautiful places by customizing them for you.

A 3 Nights and 4 Days Trip from Mumbai:
Jhansi Orchha A Backpacking Trip Itinerary
Day 1: Meet us at LTT (Lokmanya Tilak Terminus) to leave for Jhansi. The train details are emailed to you once we receive your confirmation. The train has its next stop at Thane; hence you can board the train from there.

Day 2: We reach Jhansi early in the morning and head towards our hotel as per our bookings. We prefer booking a hotel at Orchha, which makes commutation at both the places easier.
Rest and rejuvenate for some time before we get set to explore. We start with Orchha; the heritage it epitomizes reflects in the carvings and molds of the structures, and a well-versed guide helps us get a deeper understanding of the glorious historical past that we hold.

We have ample time to look into every nook and corner of the Orchha Complex, including the ever-famous Raja Mahal with huge "Chhatris" (Towers).

Day 3: Post a super busy and fruitful day; this day, you wake up, freshen up and pack your bags; we leave to visit the Fort of Jhansi. Spend a good enough time exploring and gathering knowledge about every event on its premises, and then we head to the railway station to board the train to Mumbai.

Day 4: We reach Mumbai early morning. As we part ways to reach our respective destination, we collect some memories together to be cherished for a lifetime.

Once you book with us, we send you a list of Things to Carry (TOC). If there is any other query regarding what's included in the package and what is not, do reach out to us through any of the modes of contact.

What would be the highlights of the Jhansi Orchha tour:
You experience a blend of the culture of the Orchcha and the inspiration behind the local art there.
Apart from exploring the forts there, you get the bonus of exploring the Betwa River and shopping.

What we shall be well versed with:
Rani Laxmi Bai | Manikarnika | Jhansi ki Rani: Born as Manikarnika Tambe on the banks of River Ganga in Varanasi, she was one feisty girl who feared none. Born to Bhagirathi and Morpant Tambe, she grew up in an environment where education and warfare training wasn't denied to a woman. Such an atmosphere gave birth to a fearless girl who knew how to stand for her rights. Post her marriage to Gangadhar Rao at the tender age of 14, and she came to be known as Rani of Jhansi-Rani LaxmiBai, who chose to be martyred than surrender to the Britishers.

Raja Mahal in Orchha: Constructed in the 16th and 17th Centaury by Raja Rudra Pratap Singh, its final touch was given during the reign of Raja Madhukar Shah. Composing of lavish royal accommodations with expansive and elevated balconies. The interiors are well accessorized with mirrors and murals that have remained intact post so many centuries.

Fort of Jhansi: Built as an army stronghold in the 17th century, the fort of Jhansi was constructed under the vigilance of King Bir Singh Judeo of Orchha. Being part of the revolution of the 17thcentury in the year 1857, it had witnessed the courage of Rani Laxmi Bai when she fought against the Britishers and chose martyrdom. The fort is home to the temples of Lord Ganesha and Lord Shiva.

The fort also has cannons Bhawani Shankar and Karak Bijli kept inside the fort. You get well versed with the history of Bundelkhand and also the Diorama, the battle that marks the bravery of Rani of Jhansi, who saved her people from British Rule.