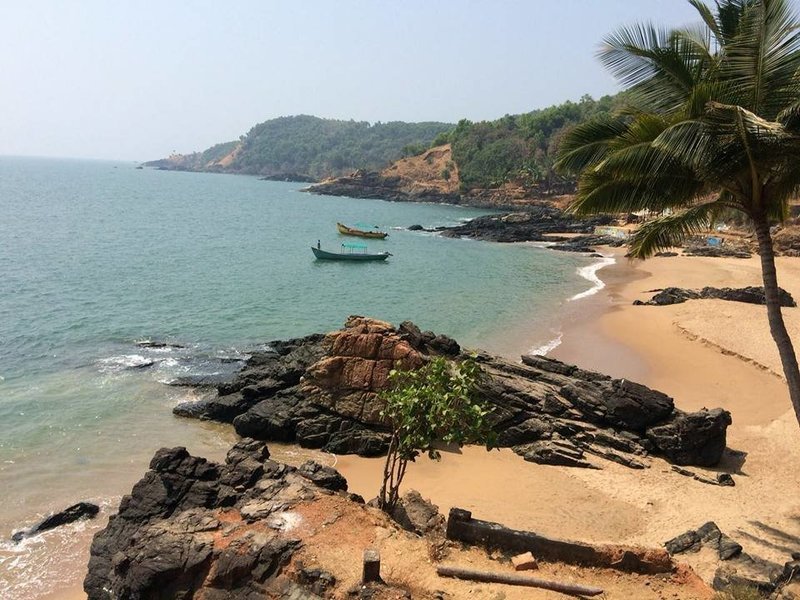 Trip to Gokarna is something you cannot refuse to taste.Gokarna, a small pilgrimage town in Karnataka has grown into a tourist destination over the years, thanks to its stretch of beautiful, sandy beaches. With the advent of foreigners thronging it, it no longer remains a quaint temple town, but a thriving vacation spot  Earlier known only for its famous Mahabaleshwar Temple, Gokarna gained popularity on the travel map through its secluded and laid back beaches (Gokarna Beach, Kudle Beach, Om Beach, Half Moon Beach and Paradise Beach) as laid back as Goa, only less commercial.

The name Gokarna conjures up images of long secluded beaches, serene sunsets, never ending horizons and expansive sea with a tinge of the local flavour and backpackers.  The temple town is now an emerging beach destination that offers something to different types of tourists with its natural beauty and its history steeped in mythology.The long sandy stretches of Om Beach and Kudle Beach are a delight for every beach lover. The beaches offer breathtaking vistas of the expansive Arabian Sea and a never ending horizon.

Gokarna is also well known for its beach trek, a trail that connects all the five beaches across hillocks. With vantage points and breathtaking vistas all along, the trek is a must while on a jaunt in Gokarna. A couple of beaches are so secluded that they are only accessible either by trek or by a boat/catamaran. Witnessing countless beaches at Gokarna & experiencing the hippie culture, beach hopping, cafe hopping are thing that you cannot miss it from your bucket list.

Go Goa Gone? Nah. Go Go, Gokarna. For quite a while, Goa persisted as the perfect sabbatical destination in India for tourists who yearned for the beach, some sun and fun which lead to its over-commercialization and jam-packing. Gokarna's calm, untouched beaches helped it gain popularity. Gokarna is known as Goa's hipster equal due to its beautiful tropical beaches without crowded tourists. Unruffled beaches are ideal for surfing, scuba diving, snorkelling, parasailing, and jet skiing. This beautiful village offers adrenaline junkies and spiritual seekers adventure and excitement.

Gokarna's bantam township in Uttara Kannada district, Karnataka, has transformed in recent years. The sandy shores, swaying palm trees, and wooden fishing boats have increased Gokarna's vacation business. Gokarna, which translates to "Cow's Ear" in Sanskrit, has some of India's most beautiful beaches due to its location on the Arabian Sea. Gokarna was a prominent South Indian pilgrimage town till recently. The town is popular with backpackers seeking quirky destinations and empty beaches.

Gokarna's grassy slopes along the white sand beachfront set it apart from most Indian beaches. The town is filled with ancient temples and sanctuaries. Ancient temples have unique architectural styles that match the pastoral houses in the major town.

A long end-of-week beach staycation meets an impromptu adventure in Gokarna. Its tranquilly, charm, and adrenaline-pumping liberties make it a bucket list destination. Gokarna's cultural sights are outstanding. Gokarna is the place to go for peace and an unusual beach experience. Go on treks, watch waves break on rocks as the sun sets, or relax and let time pass in Gokarna.

Gokarna, a tropical beachfront town, is warm and humid. The best time to visit Gokarna is during the winter months, which are colourful, relaxing, and lush. Visit Gokarna from October to March. Most tourists visit from late November to early February. From March to June, the summers are hot and humid, and from July to September, when the monsoons are in full swing, it may rain every day.

From October to March, Gokarna is at its warmest. April and May are sticky months along the coast. The monsoon season isn't the best time to visit the beaches because they're untidy and have limited dining options. Post-rains, from September to December, is the finest season for water sports.

How to Reach Gokarna?

Gokarna via Road: If you are from Karnataka, you can opt for overnight buses linking from Bangalore, Mangalore, Udupi. There are also several bus services operating from Goa to Gokarna. One can catch straight buses to Gokarna from Mysore, Hyderabad, Panjim, Hubli, and Kochi. The drive to Gokarna is exceptionally scenic, and if you wish to drive, then you can also hire a personal cab or car from these cities to drive down directly to Gokarna. The town is about 59 kilometres from Karwar, 238 kilometres from Mangalore and 483 kilometres from Bengaluru.

Gokarna via Flight: Gokarna does not have an airport of its own. Hence, there is no airport to reach Gokarna directly. Due to Goa's proximity and accessibility, one can opt to fly down to Dabolim International Airport in Goa and hire a taxi to Gokarna. The distance from Dabolim airport in Goa to Gokarna is 157 kilometres. You can also reach Gokarna from Mangalore by air around 235 kilometres away from the Gokarna town or from Hubli airport, which is 147 kilometres from Gokarna.

Day One: Depart from Mumbai by 3.30 PM and spend overnight on Train.

While one can opt to rest, spend time gazing outside the window and enjoy themselves by being engrossed in a book, a train journey for us means the ultimate time to have fun. It's a ritual to play old-school games like Cards, Poker, Mafia and UNO variations.

Worry not; if you are not aware of the rules, our trip leaders will teach you, and then you can take back these games to play on your other trips. Let nostalgia strike you while we play Never Have I Ever, Antakshari and Dumb Charades. Nothing beats reminiscing old stories and the spice of Sukha Bhel and Samosas.

We'll explore unmapped Gokarna beaches in Karnataka around daybreak. Lush green hills flank Gokarna's beaches. The best way to see Gokarna's beaches is by hiking a trail that connects five of them. Proceed to our Guesthouse or Hostel; after arriving in Gokarna and settling in, we'll rest before a full, hectic day.

All beaches are one or two km apart, so accessing them may require some hiking. For an adventurer like you, there is a chance to hike through hilly routes and explore connecting beaches.

The six-kilometre journey takes you through some of India's most picturesque beaches. Most of these beaches are "virgin," meaning they are untouched by tourists and inaccessible by road, making the journey exciting and worthwhile. You'll need to push yourself to see heaven at the end of the trip and enjoy the vistas.

We'll start our beach hike at the main Gokarna beach in Karnataka, popular with backpackers and pilgrims. We'll go through its white roofs and shacks to Kudle beach. Kudle beachfront is a hipster's refuge, surrounded by hills and rocks.

After exploring Kudle beach Karnataka, we head to the end, where steps climb up the cliff. After climbing this hill, we see a huge Om. We'll descend this tiny hill to reach Gokarna's Om beach, and two crescent shapes reflect the Hindu symbol, Om.

Half-moon beach is next. Half-moon beach's trail is quite visible and travels through woodlands. Through the trees, we'll reach Half-moon beach. This beach resembles a tropical lagoon and has a few shacks. Due to its small size, the beach seems deserted and isolated. Rice paddies are behind Half-moon beach.

We'll reach the most remote Paradise beach as we walk across the rocky terrain. Paradise Beach is aptly named. Crossing the half-moon beach is a black pebble and rock beach. The tall palm trees, soft sea spouts, and watching the sun melt into the water give the spot a magical quality. At Paradise beach, we'll relax, swim, and eat lunch at a shack. We'll return to our hostel or guesthouse after lunch.

After a night of rest and breakfast, we'll explore Gokarna. Dakshin Kashi, or Gokarna, is recognised as the Kashi of South India; ancient and magical stories surround Gokarna's temples. The town and temple are for followers of folklore, traditional stories, and architecture. We'll explore Gokarna's main town, looking for wooden tile roofs, columns of Henchina Mane, and temple marketplaces.

We will visit the Mahabaleshwar temple, noted for its Dravidian architecture and Shiva Linga, also known as the Atmalingam in Saligrama Peetha. Next is the Mahaganapathi Temple, which has a 1500-year-old Lord Ganesha statue. As a spiritual pilgrimage, we shall dive into Kotiteertha, a manufactured water tank.

Like Goa, the Gokarna flea markets are a must-see. Each object is distinguished by its personal touch from commercialised goods that suffocate creativity. Many vendors sell jewellery and decorative seashells. Medicinal herbs and musical instruments are sold at certain stalls. Gokarna has a lot for shopaholics, but buying handmade trinkets and souvenirs from locals stands out.

Then we'll look for souvenirs. Like Goa, Gokarna's best activity is browsing flea markets. Gokarna has a lot for shopaholics, but buying handcrafted souvenirs from locals is essential. Many vendors sell jewels, jewellery, and shell decorations. Each item is distinguished by its personal touch from mass-produced items that kill imagination. At the stalls, you can find medicinal ingredients and musical instruments. After looking around the temple and town, we'll eat a traditional meal and head to Kumta to catch a train back to Mumbai.

This time our train journey will comprise exchanging pictures and reminiscing about all the Gokarna memories. We will conclude the Gokarna Trip as we reach Mumbai with fond memories to cherish for a lifetime and new friends to take a different trip with.

Places to visit near Gokarna?

Nearby Places from Gokarna

One can explore Gokarna over 2 to 3 days, but if you have some more days in hand, some noteworthy nearby locations can be included in your Gokarna trip. Goa to Gokarna distance is 134.4 kilometers via NH 66

Vibhooti Waterfalls: Vibhooti is a little cascade close to Yana, around 50 kms from Sirsi North Kanara, Western Ghats. The falls got its name from the Limestone rock close by. The beautiful drop of water amid the lavish backwoods leaves one in amazement at the marvels of nature.

Yana Caves: Located a right way off 52 kilometres from Gokarna, Yana lies in Kumta town of North Karnataka. It is visited for its noteworthy sanctuaries arranged in obscurity limestone rock constructions of the western ghats. Yana is a petite town situated in Gokarna, whose sumptuous environmental factors and the rough landscape are ideal for exercises like cycling and travelling. Yana is famous for its unique stone developments called Karst or Asteroids.

Mirjan Fort: This fortification is found just 11 kilometres from Gokarna. A sixteenth-century fortress of Nawayath Sultanate is known for its history and greenery all over the post's dividers. The green spread gives an engaging perspective on the Western Ghats and Agahanashini River.

Murudeshwara: Famous for its enormous Shiva sculpture overseeing the ocean, Murudeshwara is situated at a distance of 78 kilometres from Gokarna. A sanctuary, the Shiva sculpture and the Murudeshwar seashore are the primary attractions here. The 123-ft. high Shiva sculpture is the second biggest Shiva sculpture on the planet and has become a milestone of Murudeshwar. Murudeshwar Temple is built on the slope of Kanduka. The sanctuary has a 20 celebrated gopura called the Raja Gopura. One can also plan a scuba diving experience to Netrani Islands.

Goa to murudeshwara distance is 191.6 kilometers via NH 66.

Karwar Beach and Sadashivgad Fort: An hour's drive from Gokarna, Karwar also has its novel seashores alongside the Naval base. 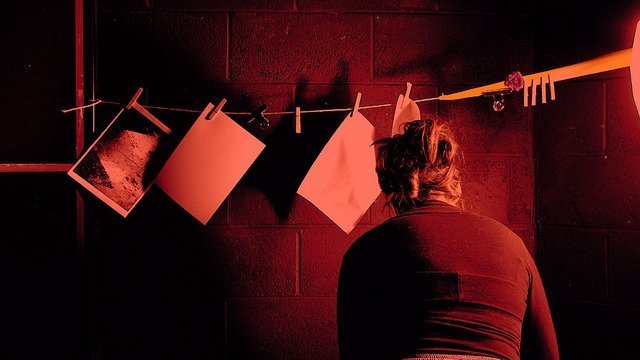 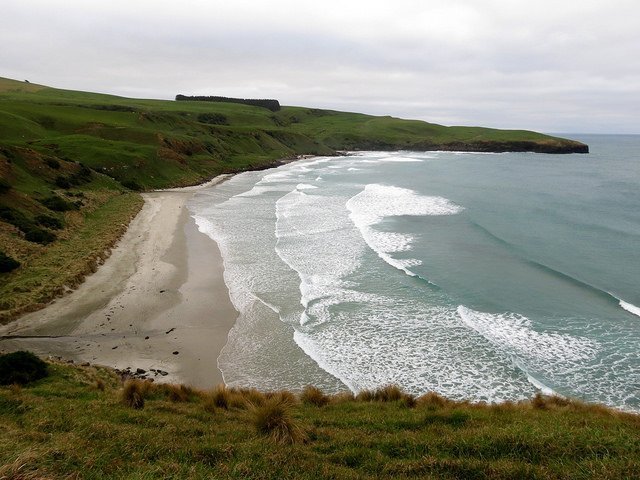 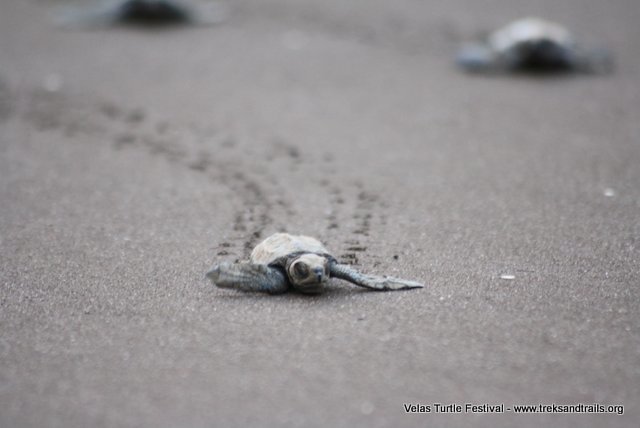