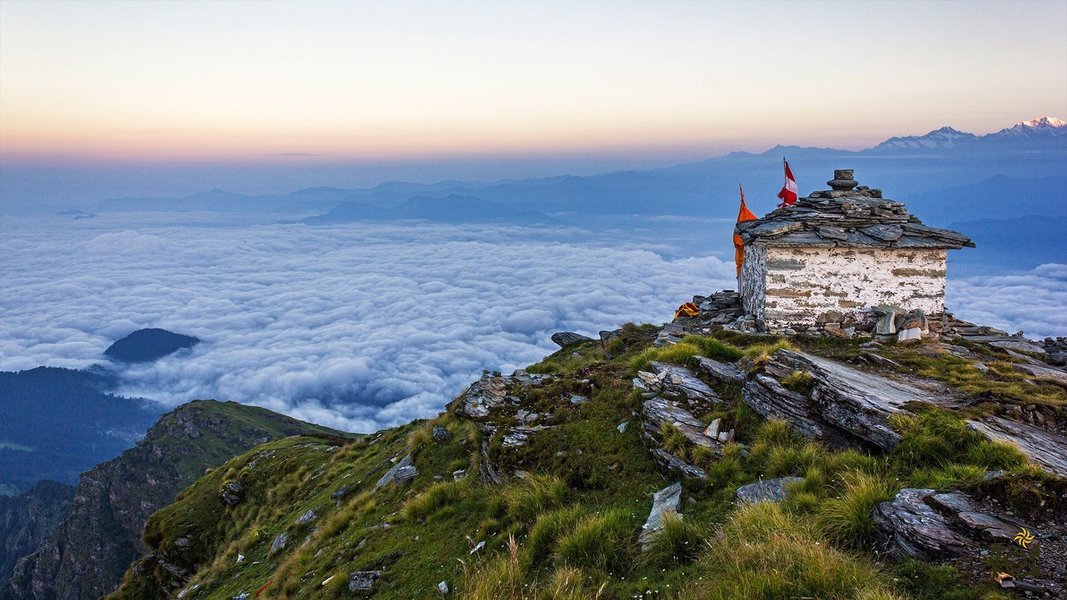 Chandrashila means Moon rock. Chopta chandrashila trek is a journey to the height of about 4000 meters above sea level. Changrashila is with a spectacular view of the Himalayas, especially Nandadevi, Trishul, Kedar Peak, Bandarpunch, and Chaukhamba peaks. There are many legends about the place. One such is that Lord Rama meditated here after defeating the Demon King Ravana. Another such legend story is that the moon god Chandra spent time here in penance. The beauty of this trekking location is incredible with its impressive vantage point offering a 360-degree panoramic view of the mighty Himalayas.

Day 1 : Arrive at Delhi and move towards Rishikesh

Arrive at Nizamuddin Railway Station in morning by 10:30 am. Our Tour Leader will be present to welcome you. Head towards Rishikesh. Check in at your hotel by 4 pm & freshenup. Later in evening get ready to witness the spectacular Ganga Aarti. Later you can enjoy hovering in streets of Rishikesh or explore Cafe's. Dinner & overnight stay in Rishikesh.

Early morning 6 am head towards Chopta. Breakfast on the way. Arrive Chopta in afternoon & freshenup. Get ready for a moderate ascent through a lovely forest trail full of rhododendron and maple trees. The Deoriatal trail is a picturesque one, to begin with. Evening head back to hotel & rest. Dinner & overnight stay in Chopta.

Day 3 : Tungnath Chandrashila Trek and back to Chopta

Early morning 7 am head towards highest Shiva Temple i.e Tungnath Chandrashila Trek. Gradual ascent to Tungnath on a well laid out path, followed by a steeper climb to Chandrashila for about an hour. The descent is on the same path. Total trek distance is 3.5 Kms from Chopta to Tungnath (3 Hrs) & 1 Km from Tungnath to Chandrashila (1 Hr). Return back to hotel in the evening & rest. Dinner & overnight stay in Chopta.

What is the distance of Chopta to Chandrashila Trek?

The Chopta to Chandrashila trek distance is around 4.5 km one way. This trek is considered moderate in difficulty, and it typically takes around 3-4 hours to complete the trek one way. The trek starts from the small village of Chopta, and it takes you through a beautiful trail of meadows, forests, and rocky terrain, leading to the summit of Chandrashila peak. The trek offers beautiful views of the surrounding peaks such as Chaukhamba, Kedarnath, Nanda devi, and more.

The distance between Chandrashila Peak Top and Tungnath is around 1.5 kilometers, and despite the steep ascent, the trip may be readily done in one hour. At Chandrashila, there is a modest temple from which one may enjoy great 360-degree beautiful scenery of the Kumaon and Garhwal hills.

Is Chandrashila trek for beginners?

The Chandrashila trek is considered to be relatively easy and is suitable for first-time trekkers. Many people choose to stay in Chopta and do a day hike to Tungnath and Chandrashila, returning on the same day, which makes it a good option for beginners.

The best time to trek from Chopta to Tungnath is from April to June and September to November. These months offer pleasant weather conditions and clear skies, making it an ideal time for trekking. April and May are the months when the rhododendrons are in full bloom and the forests are covered in vibrant colors. September to November is the post-monsoon season, and the weather is clear and perfect for trekking.

It's worth noting that in the winter, trekking can be difficult due to snowfall and slippery conditions. It's not recommended to trek in the monsoon season as the trail can be muddy and slippery, and it can be prone to landslides.

In Chopta, when can we expect to see snow?

Chopta has a pristine snow season from around the middle of January through about the middle of March, during which time skiers and snow trekkers may have a blast. Chopta is beautiful, with snow covering the trees and creating a winter wonderland atmosphere.

Can we spend the night at Tungnath temple?

The answer is yes, but only in the summer or fall seasons because the temperature in Tungnath is too cold in the winter. In reality, you will not see anyone staying at the top throughout the winter. I had recently completed the Tungnath Chandrashilla trek, which was mesmerizing.

Where to stay in Chopta Tungnath

There are a few places to stay in Chopta Tungnath. The Himalaya Eco Lodge and Treks is a popular choice. They provide luxurious, pleasant, and secure lodging. Himalayan Adventure Home, The Ravine River View Resort, and Basera Resort are some other alternatives.

How to reach Chopta Tungnath

There are several ways to reach Chopta Tungnath:

By Air: The nearest airport is Jolly Grant Airport in Dehradun, which is well-connected to major cities in India. From there, you can take a taxi or bus to reach Chopta.

By Train: The nearest railway station is Haridwar, which is well-connected to major cities in India. From there, you can take a taxi or bus to reach Chopta.

By Bus: Chopta is well connected by road, and there are regular bus services from major cities in Uttarakhand such as Rishikesh and Dehradun.

By car: You can also drive to Chopta from major cities in Uttarakhand, such as Rishikesh and Dehradun.

It's worth noting that the last stretch of the road leading to Chopta is not well-maintained and can be a bit challenging to drive on, especially in the rainy season.

Weather for the Chopta Tungnath Trek

The Chopta Tungnath trek in December can be challenging as the temperature can drop to -5 to 0 degrees Celsius, which can make it quite cold and treacherous due to snow and ice. The trail can be snow-covered and slick, making trekking difficult.It's not recommended to attempt the trek during this time, as the conditions can be dangerous and it's not safe. It's best to plan the trek during the months of April through June and September through November, which are the best months for trekking in this area.