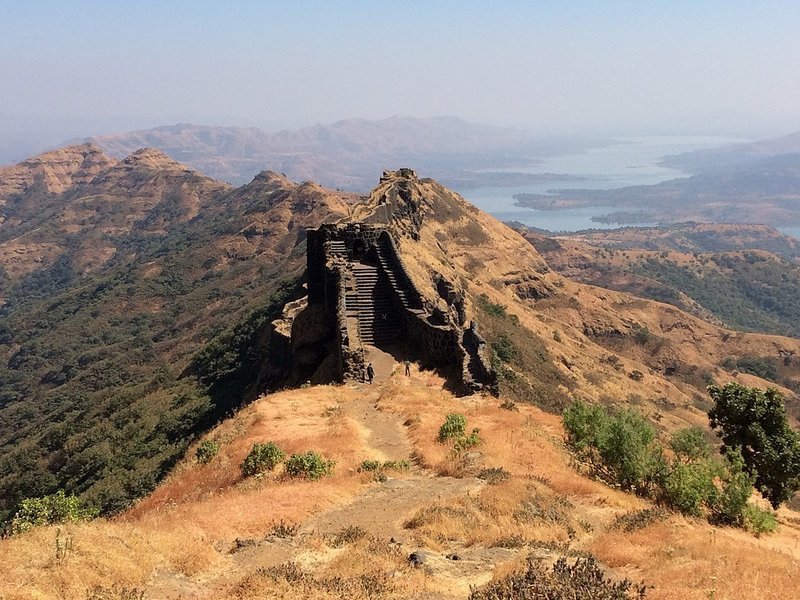 Rajgad is an enormous fort. Rajgad means King of all forts. It located south-west 60 Kms from Pune. Chhatrapati Shivaji Maharaj spent a great deal of his time on this fort close to 25 years. Rajgad is famous for its construction layout. The fort can be divided into four different parts based on geographical terrain and fortification. There are three sub-plateau Machi, namely Padmavati Machi, Suvela Machi, and Sanjevani Machi, and at the centre is the Ballekilla.

Take a step into history as you take this exciting trek from Pune, visit the Padmavati temple, and the Ancient Fort ruins. Rajgad Trek is a moderate level trek that begins at the Gunjavane Village in Pune District and ends at the Rajgad Fort. Rajgad is truly the King of all forts. It is famous for its structure. Rajgad is surrounded by Sinhagad, Torna, Mangalgad, and Purandar. Popular Maharashtra trekking and weekend destination from Pune; Rajgad, lies at a distance of about 65 Km from Pune. Rajgad fort to Torna fort trekking is famous amongst advanced trekkers.

Often in the hustle and bustle of our daily lives, we get so caught up with the monotony that we miss out on the little things that the world has to offer us. Ancient hill forts not only provide its visitors with ancient legends but also soothe their nerves. If you are keen to explore one of these beautiful hill forts, then it is advisable to plan a tour of Rajgad fort.

Visit Suvela machi and back to the Padmavati temple.

08:00 pm - Reach at base village and start return journey.

As the name suggests, the Rajgad Trek is one of the most beautiful treks of Maharashtra. The western ghats are enriched with their presence because of the rich architecture that it embodies. It has mesmerized all the trekkers from eons and hence acts as an invitation for many more to take their trekking journey.

Situated at an altitude of 4514 feet near Pune, this fort was built on Murumb Devacha Dongar Hill with a diameter of about 40 km. Its colossal size seizes it from all around, which helped the Marathas strategize better when the enemies planned the attacks on the fort.

Built in the capital city of Rajgad, it was home to Maratha Emperor Chhatrapati Shivaji Maharaj for 26 years. The fort was built very beautifully with an exotic layout.

The Trek to Rajgad:

The Trek to the Rajgad offers the beautiful scenic beauty of the Sahyadris. The famous Machis: Padmavati, Sanjivani, and Suvela Machi. All three of them are a beautiful portrayal of the architectural creativity the artisans had in those times. Nearby the fort is the ashrams, water cisterns, and temples rich in architecture and have been a center of attraction for many years. The Rajgad Fort offers a splendid view of many other forts in and around Sahyadris.

What all can I expect on the way to Rajgad Trek:

The Architecture: The temple's architecture was personally monitored by the Chhatrapati Shivaji Maharaj. Hence it stands out of all the forts that Sahyadris is home to. The Machis(watchpoints) stand out with their snake-like appearance. Built with double fortified walls, the impression is scenic and worth watching. There are also houses, small lakes, and temples that represent the rich history that the Marathas had.

The view from the fort: The view from the fort is soulful as nature offers itself in its best form and the view of the forts like Lingnan, Singagad, Torna, Raigadis as tempting as is the experience of witnessing the Sun God bestowing upon you the warmth that you desire early in the morning.

The Natural Hole at the Rajgad: At the Suvela Machi, there's a naturally created hole on the wall. Known as the Nedhe in the Marathi Language, its enormous size makes it visible from all around the Plateau and even distant forts like Sinhagad Fort.

The Elephant structure on the rock on Suvela Machi: A vast structure represents an Elephant on a huge rock and one of the best views to watch out for on the Trek.

When should you go for the Rajgad Trek:

The monsoons offer the best experience with the lush green of the Sayadris at its best and the small streams you get to cross while you witness the wildflowers bloom to their glory. Trekking during summers or winters has its advantage. You experience the clear skies and some mesmerizing view of the various first all around, probably best times to click some pictures where the weather doesn't play a spoilsport.

How do you reach the base village :

All the villages have wide roads to allow cars and can easily navigate on google maps.

The Gunjavane Village: Being closer to Pune than to Mumbai, it's easy to reach via Pune and less mentally taxing. Refer the google maps.

The Pali Village: From Pune and Mumbai, the route can be navigated with total ease.

The Vehicles can be parked at all the base villages as they hold enough space for them.

Reaching Base Village through Public Transport:

The Gunjavane Village: Trains and buses are running to and fro from Mumbai and Pune. For the bus, get down at Swargate Bus Station, Pune. From here you can catch a bus that goes to Gunjavane Village. The three options are:

Options for Return: You have to follow the same route to return, post 4 pm, there are very few buses running from the Village Bus Stand make sure you reach on time to get back home.

Pro-Tip: If you are a group of 4-5, preferably book a cab for the whole trip, it's economically cheaper and saves you from the stress of finding a vehicle to return in the evening.

Options to stay: You can stay at the fort, where the arrangements are made at the Padmavati Temple, or choose to camp by pitching the tents near the temple or any of the flat surfaces near the fort.

The Nearest Airport to the Rajgad Trek: Pune International Airport (About 68 km)

The Sections at Rajgad that can pose difficulty for the trekkers:

The Rajgad Trek comes under the Medium Difficulty level. There are a few sections that require careful navigation:

· The final Trek to the Chor Darwaza from the Gunjave Village is tricky as it's pretty steep, even though a railing helps the trekkers navigate the path with ease. However, it's recommended to wear nice trekking shoes and place your foot carefully while climbing up.

· The Trail that leads to Balekilla is about 500 feet. Some patches are steep and have no proper step to negotiate. There are ropes available to help you navigate the path quickly, and every trekker, even though he may be seasoned one should make use of it.

The Nearby Emergency Spots:

The Hospital: 20 km from the Gunjavane and 14 km from Pali Village, this Primary Health Centre, Velhe, is the nearest Medical Centre.

The Other: If nothing works, the Pan-India Emergency Response Support System is 112.

The Network and the ATMs:

The Network could be a challenge on the Trek; you still may get lucky with JIO and AirTel as service providers.

You should withdraw money either at Pune or before leaving home as the nearest ATM is Nasrapur in Gunjavane Village which is about 22 km away.

1. How long does it take to climb Rajgad fort?

The difficulty level is moderate. It takes approximately 2 1/2 hours to reach the top via Pali and 3 1/2 hours via Gunjawane. The highest point of Rajgad is Balekilla, which is a fort on Rajgad.

2. How can I go to Rajgad fort? How To Reach Rajgad Fort?

Rajgad Fort is truly the King of all forts, and It is famous for its structure. Rajgad is surrounded by Sinhagad, Torna, Mangalgad, and Purandar. Rajgad Fort is a formidable fort near Pune. A trekking and weekend destination from Pune; Rajgad, lies at a distance of about 65 Km from Pune.

Formerly known as Murumdev, Rajgad Fort was the Maratha Empire's capital during the rule of Chhatrapati Shivaji Maharaj for 25 years, before moving the capital to Raigad Fort. The Rajgad Fort was built with the treasure found on the adjacent Torna Fort.

4. Where was Rajgad Fort built?

Rajgad is a hill fort situated in the Pune district of Maharashtra, India. Formerly known as Murumdev, the fort was the capital of the Maratha Empire under the rule of Chhatrapati Shivaji Maharaj for almost 26 years, after which the capital was moved to the Raigad Fort. Rajgad fort was built on a hill called Murumbadevi Dongar or Mountain of the Goddess Murumba.

5. Why should you visit Rajgad Fort?

Today the fort is an attraction for trekkers because of its enormous size, skyrocketing height, challenging route, and historical importance of the fort. Rajgad Fort is a popular trekking destination located at 51 KM via Sinhagad road from Pune in Maharashtra.

6. How long did Chhatrapati Shivaji Maharaj stay at Rajgad Fort?

The Rajgad Pune Maharashtra is one of the many military fortresses that have been camp for the Maratha dynasty during their reign. A fort that served as a home to the legendary Chhatrapati Shivaji Maharaj for 25 years, it lies safely tucked in the Pune district of Maharashtra. Rajgad Fort was home to the warrior king. 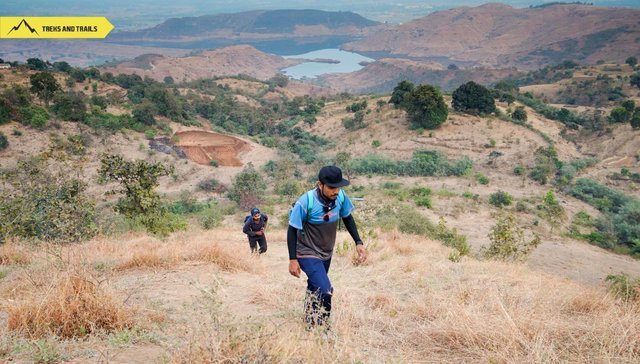