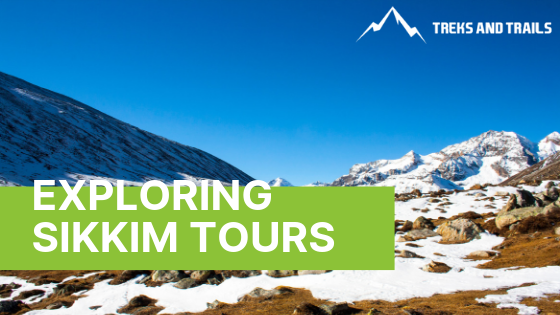 The holiday experience at the Northeastern Himalayan kingdom of Sikkim is a mesmerizing one. Sikkim showcases opulent history, natural beauty, and vibrant culture. Before you make plans of exploring Sikkim, do remember to find out the best time to go. Check out the clean lush green valleys, subtropical woodlands, rhododendron groves, and snow-capped peaks of Eastern Himalayas.

Sikkim is a small hill station hiding itself in the northeastern part of India. One can’t say that it maintains a low profile because Sikkim attracts tourists from all over the subcontinent. Travelers love this place for its quaint villages, lofty peaks, vibrant Buddhist monasteries, holy lakes, and pristine sceneries. Sikkim tour is perfect for those wanderers who are in search of paradise, mountaineering, trekking, and adventure.

Sikkim sandwiched between Tibet, Bhutan, and Nepal, is full of dramatic landscapes. People, who explore Sikkim once, remain in love with it forever. However, this hill station isn’t famous only for its alpine meadows, wildflowers, and glaciers. Sikkim boasts of having some of the best resorts and hotels in India. So, Staying at Sikkim tour shouldn’t pose any problems for you. You can choose high-end luxurious resorts or budget hotels here based on your preferences.

According to Sikkim tourism, the Best time to go at Sikkim tour is between March and May. You can also visit between October and mid-December. For those who wish to witness the natural beauty of Gangtok, the best season would be spring. It remains between March and May. Autumn, on the other hand, is the best season to get a clear view of the Himalayan Range, particularly the Kanchenjunga. However, if you want to get a picturesque view of the mountains then consider going between October and December.

There is a long list of Things to do at Sikkim tour. Unfortunately, this topic can mention only a few. The Teesta River is one of the most important water bodies in all of Sikkim. The exciting rapids of the Teesta create perfect opportunities for rafting. You should also consider doing the Goecha La trek. It is a moderately challenging route, but the sights you see will remain in your memory forever. Apart from that, you can ride ropeways in Gangtok and also try paragliding.

The community of Sikkim is mostly agrarian. That is why you get to satisfy your hunger with food made from the freshest ingredients. However, Sikkim’s cuisine isn’t too spicy, which means everyone can enjoy their cuisine. Among the best Local food at Sikkim tour, you should include Gundruk soup and momos. The first one is a favorite household vegetarian soup, which you will find in restaurants too. As for momos, they are popular in other parts of India as well, but not as tasty as Sikkim’s.

There isn’t much to know or pay heed to while traveling in Sikkim. As for the Tips for viewing Sikkim tour, you should pay attention to what your travel agency tells you. Sikkim is safe for people who want to travel alone. The people there are amiable, and you can expect them to help you whenever you need it. Since it is a hill station, you shouldn’t make the mistake of avoiding sweaters, jackets, pullovers, etc.

Other famous places near Sikkim tour cover Kalimpong, Pelling, and Darjeeling. You must include Darjeeling in your list because it is one of the most popular hill stations in India.

As an Intro of the state tour, you should know that it is one of the tiniest states in India. It covers a mere seven thousand and ninety-six square kilometers. In spite of being small, this state is full of wondrous sites that ooze beauty. Wherever you look, you will spot snow-capped mountains, colorful rhododendrons, green valleys, luscious waterfalls, and prosperous tea gardens. If you are in search of mental peace, then you will also come across Buddhist monasteries here.

Every year, thousands of people frequent Sikkim, but it remains to be a relatively unexplored and unexploited beauty. The best way of the state tour, according to experts, is the roadway. However, you can also get there by trains and flight. You can fly to Sikkim and land at Pakyong Airport, but you have to board an airplane from Bagdogra. Trains can take you to Siliguri or New Jalpaiguri, from where you will hire cabs or private vehicles. If you travel by road, then you have to avail the National Highway 31A.